Crashing upon opening a project

First time posting here and have just bought/subscribed to UE4 :). I’ve got a small problem though when attempting to open the sample project, and the same when trying to open a new project. The highly helpful error message doesn’t give me anything but the following :

We apologize for the inconvenience.
Please send this crash report to help improve our software. 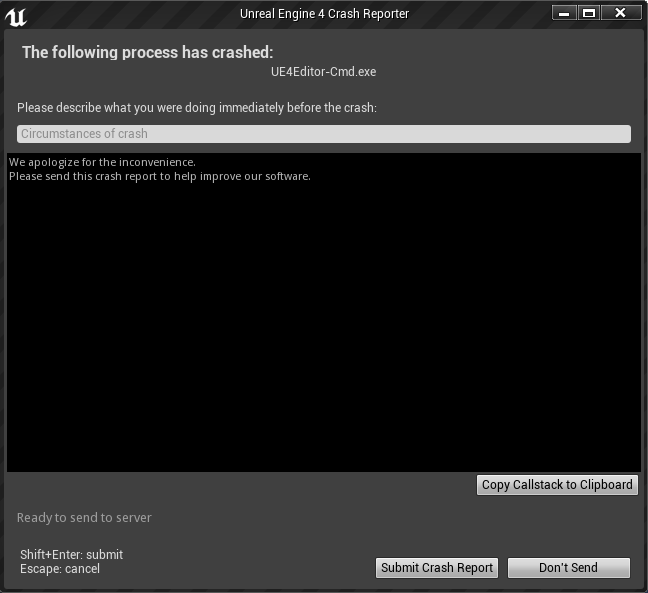 I don’t suppose anyone else has got this problem/knows of it and is willing to help :)?

Edit : On a side note, the UDK is still opening up fine.

Looking through the log file I have now found this is the only negative thing I can see :

Would you please direct your bug to the answerhub at https://answers.unrealengine.com/index.html so we are better able to assist you?

Thank you and have a great day,
Adam

I thought I’d post here that neither my CPU or RAM is under any particular amount of stress/high usage when viewed in task manager when the program tries to run incase someone here has any ideas :)?

Did you try running as administrator?

Did you try registering the uproject files using the batch file?

Try running this as admin:
\UE4\Engine\Build\BatchFiles\RegisterShellCommands.bat

Then try opening your uproject again. If that fails you may have to turn off UAC. Several members on our team have this issue.

Make sure your path is correct.

Thanks for the help mate however I can’t seem to see that specific batch file in the folder?

I have been running as admin, although something I’d like to check. I assume the launcher being run as admin is ok and the editor doesn’t have to be done separately in some sort of way?

Still got the problem if anyone else can help :(.

Still got the problem if anyone else can help :(.

Does your computer meet all the requirements?
You can’t compare your crash by using UDK as a benchmark. That’s like comparing an iPhone 1 to an iPhone 15

I am a tiny amount under the minimum specs but have seen multiple people getting it started with quite a bit lower specs than me.

Check your space on c: drive. When getting low, you crash.

Check your space on c: drive. When getting low, you crash.

400gb of space remaining there unfortunately :(.

Hold up, could have found a potential problem but I’m not sure. Visual studio is refusing to work or reinstallf for me as well. Could visual studio not working somehow have a knock on effect and not let UE4 open perhaps?

I know this isn’t a VS forum but if anyone could help me with the following errors when installing it from an ISO it would be much appreciate it as I’m getting a bit ****** now having spent nearly 10 hours trying to get UE4 to run in any way possible :D.

The cryptographic operation failed due to a local security option setting.

Guess this is my last bump here in a hope that someone knows how to solve this before I just have to sit back and hope someone else finally has the same problem within time and works out how to solve it.