Crash after opening the persona

so this is my third post about the same problem with no answer.

so this is the step I did before the crash happen:

Why are you importing the FBX in the first place? The Mannequin is in the starter content for the projects(For example Top Down. You do not need to import some FBX you downloaded somewhere(where?).

Also it did not crash in Persona, the load of the Mannequin failed because “LogD3D11RHI: Timed out while waiting for GPU to catch up. (0.5 s)”

What kind of hardware are you running this on? Can you load the Skeletal mesh on its own?(Place it into the scene and play for example)

As I had asked for in your other thread, can you send the FBX that you’re using? aknarts is right that all the third person animations are available in the third person template projects, but we’d still like to investigate any crash that happens.

i am trying to attach it but its not working

all i was doing is following the steps on the tutorial, in the tutorial it said to start from scatch that why and to import FBX, plus i got the FBX from the unrealengine.wiki website if i am not mistaken 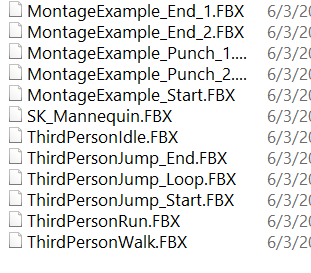 Can you send a link to the particular tutorial you are speaking of? We can get the FBX from there the same way you did.

this video explain and where to get the FBX, if you press next , you will see the video which explain the import

Where you guys able to figure something out ? I would really love to work on unreal engine

After trying with those files, I wasn’t able to get the crash, but on second viewing of your logs I saw that this is a known crash on some PC’s since 4.14.

See UE-42280. You can see some workarounds in the description of that bug, but if none of that works for you, I’d suggest going back to 4.13 until this issue is resolved.

Sorry if I misunderstood, but it sounded like you were just doing tutorials. If that’s the case you can simply download 4.13 from the launcher. If you have an active project, then the only way to go back is to start over.