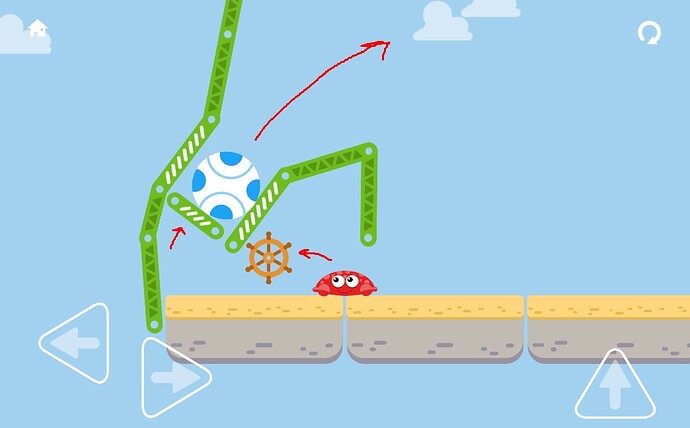 My name is Denys Almaral, a 3ds Max artist with game development dreams, becoming true thanks to UE4.

30 days ago (December 3) I re-subscribed to download 4.6, and decided to be serious this time in learning blueprint programming with UE4 editor. I tried before, but I only watched some videos and sample demos. This time, after an intense week of tutorials and sample explorations, I decided to start my first 2D simple game for android devices, experimenting with this gameplay: Where the first early version of my game born (YT Video) 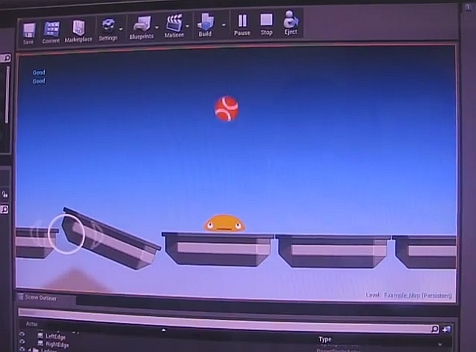 Today this is what I have from 20 days of work (Art Director Mary Navarro helped me with the 2D graphics): Crabby Ball BETA game-play teaser (YT VIDEO). 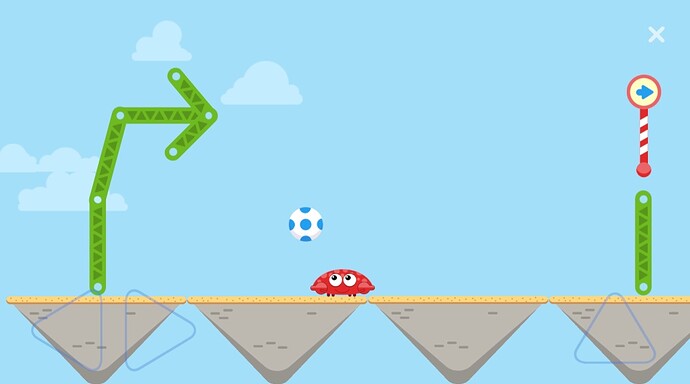 Crabby Ball is a simple 2D physics platformer game in which you have to control the ball with little Crabby’s head, and the objective is to try to cross the ball over or trough a colorful sign. It currently has 12 levels.

Notes about my experience UE4:

Remember the game is still Work In Progress! But you can try the first 12 levels.
https://play.google.com/store/apps/details?id=com.denysalmaral.CrabbyBall

Thanks! Any comments or questions would be very appreciated!

I’ll keep sharing more notes about past and future development of Crabby Ball on this thread:

The first issue you will face when working with sprites with translucent material from using .PNG images is the drawing order problem. I assumed first that setting different depth (Y coordinates) will be enough to create the layers of my game… FAIL! Translucent materials in 3D engines are sorted by object position and they not take benefits of rendering Z-Buffer. Then the magic property is: “Translucency Sort Priority”, from Rendering category of sprite details.

Here is the problem and solution on answerhub (Thanks to Eric Ketchum for the help): https://answers.unrealengine.com/questions/146920/z-buffer-problems-with-paper2d-sprites-using-trans.html

Would be very bad if your gameplay depends on Physics and it behave different when running on different devices with changing frame-rate. Using console command t.maxFPS 40, I though was good to limit frame-rate to safe some CPU usage but while the game runs always fine in my PC when playing it on Galaxy S2 sometimes the ball behaved like having half of its gravity force. Removing the console command fix it, but my game is still not completely safe of glitches, specially when the level have just loaded the player jump and send the ball at very high speed… I managed to clamp its velocity vector after any impact but this is not very nice solution.
I have tried sub-stepping and many configuration combinations until my game is acceptable but I’m not completely satisfied. What I’m think is to avoiding, making my game-play depending on UE4 physics next time

A lot is already said about this subject here in the forums and answerhub. If you are making a simple 2D game you will enjoy the developing process but your game will suffer a big disadvantage on google play competition because your app will require a nice GPU and more than 36MB (minimun download), while a similar 2D game made elsewhere will run on almost every phone with less than 10MB of download size.

This is when you left your project last night working perfectly then in the morning with your head full of new ideas to implement and then UE4 crashes on your face from the first time you click Play In Editor. Without modifying anything, without a clue, without apparent reason.

Just everything was working perfectly yesterday with my main menu-Level, and this morning when first launch it crashes on playing on PIE. Don’t even know where to start looking… >:-( … really dis-motivational. 4.6.1 Binary link text

Game’s looking good. Though the current controls feel a little odd (or I’m just too stupid to get used to them :D).

Hi @Fuchs, thanks for trying it, yes is not an easy task make good controls for a platformer that need movement precision, hope you like better the new controls in the next update

Very nice, a simple but fun game design. Clever, because it will mean making new levels will be pretty simple to do.

I played through to level 11 in one sitting, but had to call it quits there its very challenging - I’ll try again later

Personally I found the controls easy and intuitive to use, but I would be interested in trying the other controls you described (left right screen regions / swipe jump)

The game performed well on my S4 (given it sounds like you are testing on a S2 that’s not surprising) the player character does get a bit jittery when moving fast in one direction though, the clouds were still moving smoothly.

Do you have plans for collectables? I noticed with levels like level 8 you can actually take a slightly easier path by balancing the ball rather than trying to knock it over the top, having collectables along the top route would reward people for taking that path over the easier one which makes it more competitive and give it a higher replayability.

How about moving platforms in later levels? I could imagine a spinning platform with 4 prongs could be an interesting challenge.

In terms of aesthetics, I do like its simplicity. Here are a few ideas you can take with a grain of salt. Secondary motion on the player would be nice, a bit of drag on his claws, and maybe even some subtle rotation of his body when he is moving and overlap when he jumps and lands. It would be good to get his little feet moving as well, even if it’s just up and down in alternating pairs. I love how his eyes follows the ball, maybe even put a blink in there when he hits the ball from a great height. Parallax on those clouds would go a long way aswell

Its a shame about the engine size, the size of the download was something I noted straight away.

Sorry for being so wordy, but I think it has a lot of potential and am looking forward to seeing more developments!

Hi @Laz84! That’s was a nice constructive analysis of my game! Thank you very much!

I’m happy to tell you that many things you’re pointing out are already in the roadmap! for fixes and additions! And it’s great that you take the time to write me such a descriptive feedback!

Thanks again, With more people like you giving me motivation and if the engine crashes allow me, I hope this game become something really fun.

Exciting developments! I look forward to trying them out too.

Hi, the development of Crabby Ball was going very slow, with great pauses due to lack of time.

This is the current state you can play the HTML5 version with keyboard or controller: http://web.denysalmaral.com/games/crabbyball/

Good news are that version 4.8 fixed many things and added new features that allow me to make it better

The only thing I try to no think too much about it is the problem with incompatibilities with many devices, what make my game very weak to compete with other 2D games that runs on any device.

Just one thing I noticed, when you fall or jump down, you won’t die… for now that’s a little game breaking

Hi all!
Many small improvements and addition for the current version.

You can install here: https://play.google.com/store/apps/details?id=com.denysalmaral.CrabbyBall 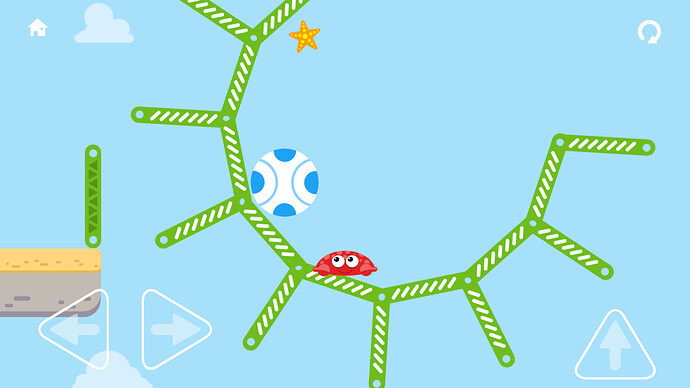 Crashes has gone forever in UE4 editor! Blueprinting is all fun!

Trigger to activate a cannon

Playing one of the new levels:

New slowdown in development due to moving to new version 4.9, and dealing with many issues…
Additionally I have to take a pause on this for about a month because high workload… :-/

With UE4 version 4.10.0 seems like crashes has gone forever! And many small cool features that makes you feel better using the editor.

Finally we have splash screen for android!

Now I notice the two attachments of my previous message are broken, let’s try it again: 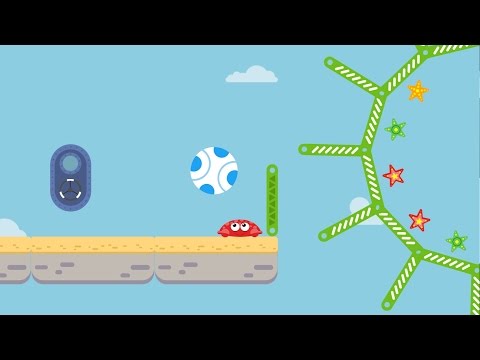 Submitted the game to Greenlight to sense steam users acceptation: http://steamcommunity.com/sharedfiles/filedetails/?id=574950901
If it worth to make a PC version then I’ll have to improve the visuals and add a lot of more features and game content.