Converting a Variable to Function?

Hey guys,
I am quite new to the unreal engine and are currently trying to rebuild the FPS_Hero from the “ShooterGame”. But in the AnimationBlueprint I don’t understand the part shown in the picture, it looks to me like the Variable “Is Running” was converted to a function, though after 2 hours of web research and tutorial watching i did not find anything on how to do this,
help please! 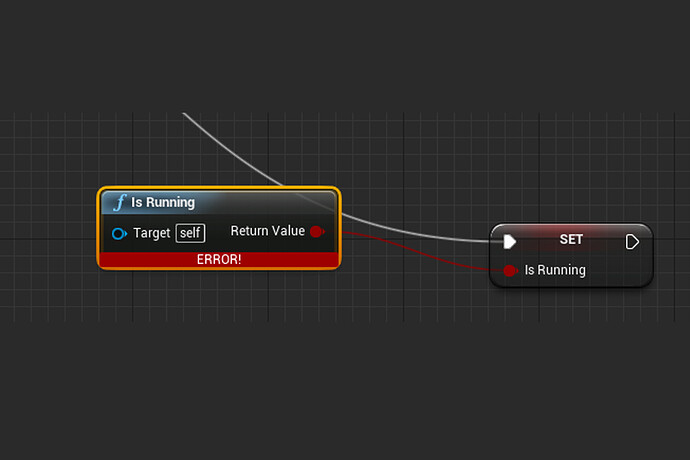 What I should Also mention is that I found a question where I had to use “assign” did not find the option tho, even after unticking “context sensitive”, if that is the solution, any idea on how to “assign”?

Are you entirely sure this is your variable?

Character has a function called like that so you might’ve accidentally used that one.

Try placing the “get is running” via Ctrl + drag & drop or simply moving the variable from your list and then after you dropped it select “get”.

It should get you the simple node.

Well tried that, did not work… And don’t I need a “set” Variable?
As it seems like in the ShooterGame Example they created a ser-Variable and promoted the value output to a function which then can be connected to the cast target…
Thank you

So you have a variable and want to read it from another blueprint? You don’t need any function for that though. Simply cast whatever input you have (for example if your bullet hits something you get the actor which caused the hit.) to the type you expect and as result you get a pin of that type. If the cast was successful you can access any variable from within that actor.

Or did I completely fail to see your problem twice now?

I actually solved it without those functions, it’s fine thanks a lot tho mate