So I just compiled UE4.18.2 from Source (cuz I’m on linux we have no binaries).
After like 3 hours or so it FINALLY finishes. I start the engine, select my C++ project and it tells me it has to recompile my project (because I was using 4.16 until now). Fine I think…
But what actually happened was that, 2 minutes after I just compiled the entire engine, IT RECOMPILED THE ENTIRE ENGINE!!!
But that’s not enough! After waiting another 2 hours, it tells me that the engine could not be compiled, although just minutes before it compiled just fine!! WTF?!

How can I stop it from re-compiling the entire engine just because I want to open a C++ project?

Have you been able to solve this problem? Currently I am guessing and checking repeatedly to narrow down where my errors are in my code. When compiling from within the editor, all I know is that the compile failed. But it doesn’t say anything useful about the error. Building otherwise from KDevelop compiles the whole editor and it the process weird things happen. (Compiler button disappears in editor, IDE no longer recognized…)

Still happens in 4.22.0.
I tried to compile a project it started to recompile the entire engine. I canceled and now i cannot open other projects that were perfectly fine. Once the recompile of the engine starts, i think you need to let it finish. 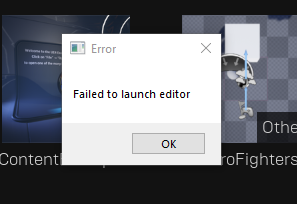