Probably a silly question for this forum section, but I’ve just downloaded and installed 4.6 main branch from Git and am now compiling it in VS. I previously have 4.6 public release (non-Git version) already installed, and a project associated with that version. The project is on Perforce and is shared among my team. What’s the most effective way to deploy the new custom compiled version to my team, so that I can update our project and have everyone still be able to run it? Can I somehow drop the compiled engine onto our current Perforce repo, or do I need to start with a clean repo and import my project after I set up the engine? What about separate repositories to keep the project separate from the engine?

Last rapid fire question - does everyone on the team need the compiled engine to open my project (if the project is associated with my compiled engine)?

As a rule, you should always use the same build of the engine for everyone to avoid any versioning conflicts. You can store the engine side-by-side with any games you work on - that’s what we do internally at Epic. In the root of your engine directory you’ll find a .uprojectdirs file, which lists all the subdirectories that the engine will look for to find projects. It contains “./” by default (meaning “look for projects in the same directory as the .uprojectdirs file”), so you can just put your project folder next to the Engine folder, and it won’t prompt you to keep updating the version whenever team members sync the latest project in the future. We typically mask out the source folders for artists, so they don’t have to sync all that stuff.

I think the scope I guessed at earlier is slightly off from what you’re describing: 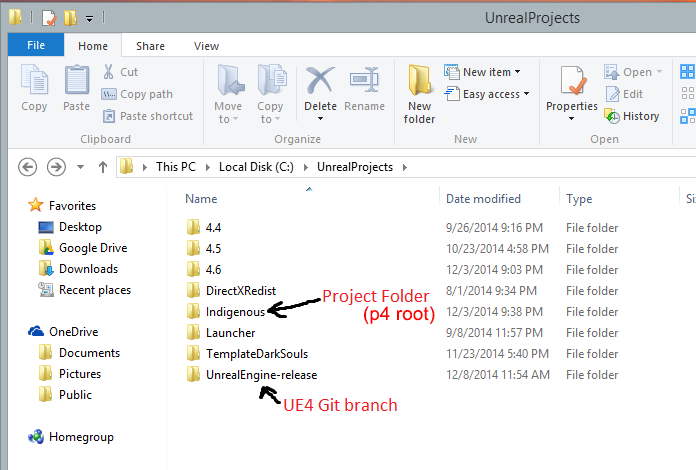 I think I should pull all the files/folders from UnrealEngine-release out and into the folder in this picture, so the Engine folder (and the .uprojectdirs file) is sitting next to the Indigenous project folder.

We typically mask out the source folders for artists, so they don’t have to sync all that stuff.

Does that mean the Engine/Source folder specifically? I really don’t want them bothering with the Samples and Templates folders as those combine to about 1GB. Can I leave off any other folders? I’m guessing I don’t need to commit any of the files next to the Engine folder:

Sorry for making you spell it out - I don’t ever use visual studio. I’m barely a step above those “artists” you’re describing