I already ran Automation test with the Performance Capture box checked. The test succeeded but according to this tutorial: Screenshot Comparison Tool | Unreal Engine Documentation I should be able to see my screenshots in the Screen Comparison tab.
What I get is only a file browser but no screenshots pictures.

I’ve set it up as a blueprint actor that inherits from the functional test class. 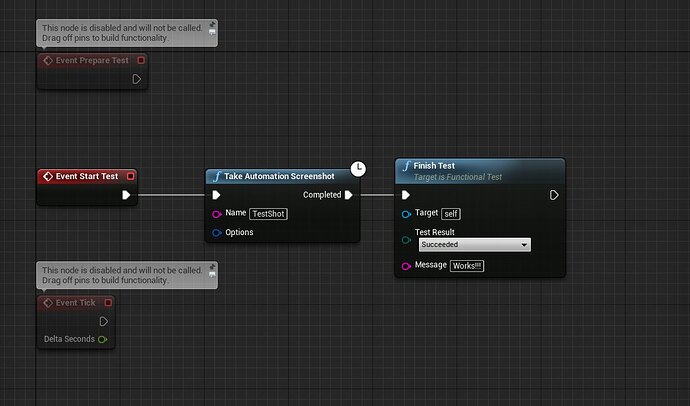 When I look into the log it looks like the screenshot is being saved:
*AutomationFunctionLibrary: Screenshot captured as D:/<PROJECTNAME>/Saved/Automation/FTEST_TEST2_Test.png/Windows_D3D11_SM5_STEREO/NVIDIA GeForce GTX 980 Ti.png
*

But when I follow the path I don’t find anything.

Do you guys know what I could be missing?

Hi I hope I answered this or very similar question here:
https://answers.unrealengine.com/questions/852768/functional-test-how-take-screenshot.html?childToView=1011082#answer-1011082