This post is really just to gauge the interest of the community in some sort of free community-created standardized GUI Library for UE4 using just Blueprints. It comes after my own frustration in finding a decent solution, and after ‘solutions’ like Coherent-UI would end up costing more than I would pay for Unreal itself. That being said I’m aware changes are coming in the later versions to Unreal, including nifty things like UMG.

I’m working on my own library and once it’s at least partially feature complete / stable I’d love to throw it to the wolves here and have people contribute/improve it, because while my C+±fu is great, I’m sure my blueprints could use a lot of cleaning up/refining/tweaking/improving.

So far I have a base GUIObject, as well as Buttons, Frames (containers), and Windows (containers and draggable) all children of the base GUIObject.
Buttons and Windows support On Click events, and Buttons support optional texture changes on on-hover and on-click events.
Buttons have an assigned sound they can optionally play On Click and I’ll add more optional sounds to on hover and such.
I recent implemented 9-slice image support in Windows and I’ll probably migrate the changes over to the rest of the objects soon.
I’m currently working on Gauges (vertical and horizontal).

I know it’s not a lot yet but it’s only about a week’s worth of casual-work for myself. Given how much my full-time job gets in the way, I hope to have even more done by next weekend.
If enough people actually express interest in what I have so far, I’ll be more than happy to toss it up on GitHub in a public repo for all to enjoy/improve.

Gfycat of the mouse-moving feature on the above (9-slice) window: [video]http://gfycat.com/ElderlyImprobableArcticseal[/video]

Sounds useful to me. I just switched from Unity to UE4 and have been investigating UI options… UMG will be great when it’s ready, but in the interim at least I’d be happy to contribute to a homegrown solution.

This is very interesting. I would love to troubleshoot this and give it a shot.

A free BP GUI solution is desperately needed. UMG doesn’t have a timeframe as far as I know and isn’t high on the totem pole :(.

Awesome work so far, I hope you keep at it.

A free BP GUI solution is desperately needed. UMG doesn’t have a timeframe as far as I know and isn’t high on the totem pole :(.

UMG does have a time frame, and is the highest on the totem pole

It can be enabled with -umg. In 4.4 there will be an option under the Experimental section of the editor preferences to enable it. You can already achieve a great deal with UMG, though the file format is still in flux so there’s currently no guarantee of backwards compatibility.

@edover you may want to consider a community UMG widget kit instead of a from scratch UI system; it’s a very long road… The UMG editor has a palette of widgets users can spawn, any UObject that derives from UWidget is added to the palette. I’m trying to make the UMG editor have ways for users to extend it with stuffs, so that the community can add things we don’t think of.

Glad you stepped in because I’ve been seriously wondering about the timeline for UMG too. Now that you’ve clarified things, I really don’t want to start using it until it’s stable so 4.6 it is, (maybe 4.5 depending).

@Everyone,
Personally I’m a little disappointed that there was nothing like UMG ready from the start. I would have had something like that be a release feature since a game engine needs strong UI support…and before anyone mentions C++…I am fluent but I’m seriously attempting to do everything in my current game with JUST Blueprints, mostly to prove it can be done. I’ve re-evaluated that decision a few times but stuck with it so far, mostly because I find myself coming up with creative solutions. I do want to add mod support to the game so I may have to break my rule and write an XML reader in C++.

I’ve seriously considered grabbing RadiantSDKto use as a stop-gap solution, especially since I now know I’ve got a few (5-6?) months for it to be stabilized.

That said, I’ll poke into the best way to put the Blueprints for this up on a repository and definitely share with the community. I haven’t gotten much work done on it since my initial post and things definitely need to be revised and cleaned up. I was very sloppy when creating them.
The UMG Widget Kit sounds so, so very tempting, but I barely have the time to work on my current project and I’m not fond of the idea of starting the work when backwards compatibility might go out the window in a month.

If anyone has any suggestions on the best way to put just the Blueprints up in a Repo, or wants to manage it, please let me know via PM.
Other than a few functions inside the HUD blueprint (for depth sorting and drawing) I think everything is pretty much contained inside the GUI BPs themselves. My Github account is a bit crowded as it is, but I suppose one more repo wouldn’t be horrible.
When I’ve got stable base, I’ll put the URL in the top comment.

I am not sure if you have checked this out yet, but it is an open source alternative to RadianUI called VaQuoleUI made by user ufna. I would take a look through it as well if you can’t wait for UMG (although it is usable now), here is the forum post about it:
https://forums.unrealengine.com/showthread.php?6434-Plugin-Web-UI-framework-plugin-(VaQuoleUI)
and here is the plugin download:
https://wiki.unrealengine.com/VaQuoleUI_Plugin

I am not sure if you have checked this out yet, but it is an open source alternative to RadianUI called VaQuoleUI made by user ufna. I would take a look through it as well if you can’t wait for UMG (although it is usable now), here is the forum post about it:
https://forums.unrealengine.com/showthread.php?6434-Plugin-Web-UI-framework-plugin-(VaQuoleUI)
and here is the plugin download:
https://wiki.unrealengine.com/VaQuoleUI_Plugin

I actually did know about it, and appreciate the heads up in this topic for anyone else who was interested. I don’t remember at the moment why I chose Radiant over VQUI but rest assured I’ll re-evaluate my decision, especially since we now have a firm timeline on UMG.

I may not be 100% on it, but I think VQUI uses QT and personally I haven’t had any luck getting it installed yet.

RadiantUI supports interaction with arbitrary 3D meshes in your scene without any limitations, it just works (VaQuoleUI requires you use planar or cylindrical mapping) and input binding and forwarding is automatic. It also supports multiplayer replication, HUDs, and full blueprint scripting without needing to modify any C++. The Javascript interface with blueprints is more robust and easier to use. It only supports win7 and later right now though. I think it’s the best solution but I wrote it. 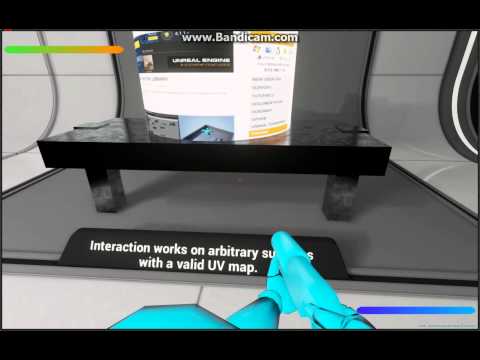 Tutorials if you want to see what’s involved: http://www.youtube.com/playlist?list=PLcWa3XQ61qoZDrt2_YiJ66XUekrZu0wxr