Hi, I recently started learning UE4 and I have progressed a bit by following the official tutorials on YouTube.
Today I followed a tutorial which explained how to make a system where you interact with an actor from a distance.
The tricky bit was that it essentially used the camera position and forward vector and then use a single line trace to
interact with an actor. After I understood that it seems so obvious why I need to do all the vector stuff and so on.
In essence there are different gameplay mechanics that I am guessing have a common way of being implemented.
For example a fight system in a third person shooter, an RPG game where you build stuff, etc.
What I am looking for is some sort of resource (book, site, other) where common mechanics like this are explained
in an algorithmic way that breaks them down (and explains maths theory behind something if needed).
Can you give me any pointers to where I might find something like that? Thanks!

There are lots of great resources, but a lot of the resources become outdated over time. I am not aware of any tutorials that break things down to an algorithmic level, but I’m sure there is something around here. If you have any small questions, go ahead and Skype me (Skype info is underneath my username).

Eg. If a player is at (x,y,z) then moves “to the right and up a bit” what is the relevant vector operation and where does he end up. Also things like if a player gets hit from the bottom right how is the force applied over time (Vector3 operation over time, Rotation, Lerp, etc). 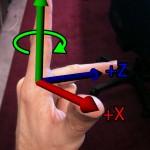