I was wondering if there was some people interested in the UMG widget handling system wich I am currently using on a project and on the dialog displaying widget. It is a system made to make the logic of UMG widgets way more accessible to the UI designers/artists and to cut off the part development time that involves looking up into documentation or in source code.
It is a simplification applied to the UE system that is based upon the assumption that the UMG-using developer does not want to display more than a widget of the same exact type at the time (wich is true with the only exception of rows. They would need a more specific system for them or could just use unreal functions. That kind of system would be created or not depnding on the feedback I get on this thread.)

Here below I’ve put a short description of the features of the two things:

-Possibility to display normal and timed user dialogs. Their “button clicked”, “esc pressed”, and “display time elapsed” events can be bound with any functionality as soon as they are created with just an Object reference and the name of the function that needs to called on it. However an image should talk more than another 10 phrases in this case 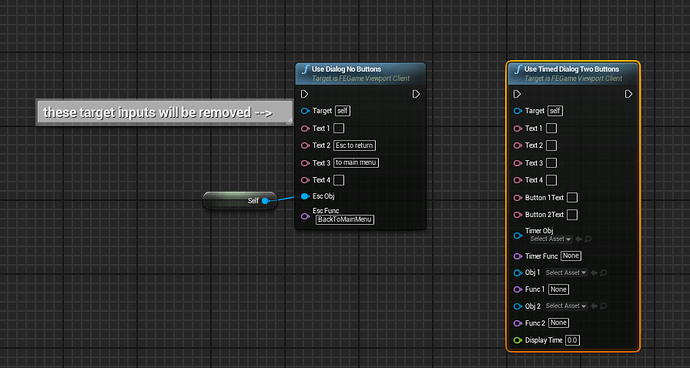 -The dialog widgets would obviously come with it. There are also two functions to make the whole thing more complete. The target pin s gonig to be removed here too to make things get even simplier.

So that’s what I am working on, let me know how what features are more important for you, how much bucks would you estimate this work. And also how much would you estimate it if it would come with a small document describing the underlying logic, or assistance for the future ue releases (since this is a weak point of marketplace products as I’ve seen)
If you desire to have the controllable-from-c++ version of the thing, contact me privately with my email address aramini.martin@outlook.it

Let me have your opinion on this, Bye!

Giving it a small bump…