I am proud to announce Attack Animal: Wolf has been released in the Marketplace. 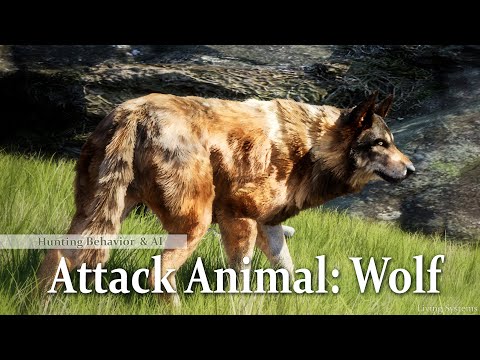 Attack Animal: Wolf has a Health, Hunger, and Stamina system.

Attack Animal: Wolf was designed to be easy to set up - just drag and drop some Wolf Path Nodes into your levels, drag in some Wild Wolves, and add an Enemy Tag and Parent any actor you want these Wolves to hunt. It’s just that easy. Setup instructions are in the Demo level.

An important note to all buyers - I have included both Groom Fur and Hair Planes Fur versions for each Wolf. It is very clear to me that Groom is the future, however it is still early days for the Groom system and there are still many issues for the Epic team to hammer out. This is why I included a Hair Plane version for each of these wolves. As the Groom technology evolves, I will continue to keep the groom versions of the Wolves up to date. The main issue is having more than one groom asset on screen at the same time- the shader can be buggy. This same issue is present in the Meerkat Demo and I believe the Epic team will iron this out as the Groom tech improves.

Number of characters: 6 (RedWolf, BrownWolf, and GreyWolf in both Groom and Hair Planes options)

Hello
We are an indie studio from Brazil that is developing an adventure game based on our indigenous culture.
Game levels are all nature, forest and rivers, representing south america rain forest.

We bought all your animals to use in the scenarios

Was wondering if you´re available to work as a freelancer to integrate all the packs and configure hunting patters for boar and wolf.

Thanks so much for creating these amazing animals.

Sounds like an awesome project, a project I’d be proud to have my work in for sure!
Unfortunately I’m not available for freelance work but I’m always here if you run into any issues.

Also keep me posted on the project I’d love to see what you come up with!