Coding 9 minus 0 gives me 0? is unreal engine minus node broken?

Hi, I am making a game tittle textbox that plays a certain sound if the number of characters increase or decrease, but I have a problem.

Maybe it’s my coding, or my computer is dumber than a rock.

Ok, so have you started simple like printing out the length at the very beginning of the chain? Clearly 9-0 is not going to give you 0 so it’s more likely that your chain of events is masking an issue.

while waiting I tried to debug by doing a bunch of print strings.

for some reason after uploading that post, the minus actually worked?!
then I coded it to print: “sound stop” when the delay ended, but the sound kept on playing after “sound stop” was printed 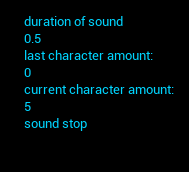 The issue is, you

you almost got the point, last_length_1 = current length because the next time the player edits the textbox, the computer will need to get the length of the last edit, to know the increase/decrease in characters.

if last length was changed before anything happened, I would probobly get a 0!

I just have to fix the audio not stopping problem, ima make another post for that.

oof, man. I know it’s not what you asked, but I got to say something. Home dawg, clean up that graph!

lol, it’s not about tidiness for tidiness sake. You will get waaay more confused about your code if you don’t keep the graph orderly. It’s gonna get very difficult to debug, or like you are experiencing right here - simple problems can seem complicated if you dont have a graph that is friendly to the human eye.

CHeck this out for guidelines:
GitHub - Allar/ue5-style-guide: An attempt to make Unreal Engine 4 projects more consistent

or if you want easy mode, I highly recommend the marketplace asset called “blueprint assist.” That makes it so that you can just press one button and the graph organizes itself neatly.

It’s a really good idea to use the reroute nodes to tidy up your blueprints. Click “Add Reroute Node…” from the right-click menu to add one. It’ll let you straighten/branch out your wires a lot nicer.