[Cloth Physics] Cape is lying down on something, weird!

I have a weird issue with my cloth cape…
I followed a tutorial that neatly showed how todo this but then my cape does this weird thing.
It looks like its lying on something… I played with all the cape settings and added more verts, nothing changes.
I painted it different multiple times too.
Physics asset also didnt change anything regardless how i lay it out.

Anyone an idea why the cape lies down like this and doesnt unfold completly? 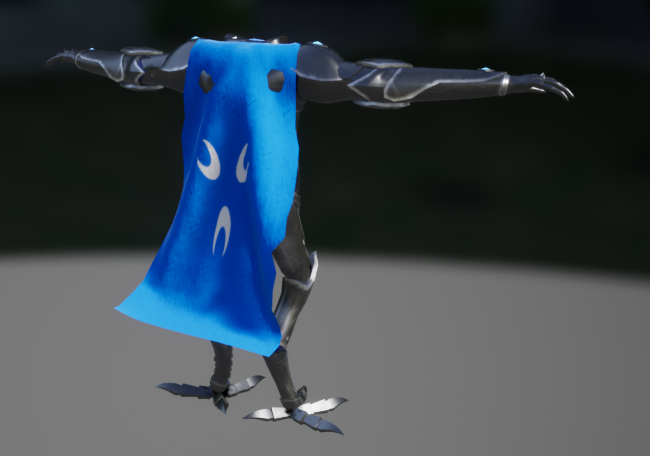 The issue is that the cape is bending at the bottom, instead of unfolding downwards. And it is painted properly fully at 100 white. It shouldnt behave like this.

Do you mean at the bottom of it, where it’s not dropping completely? Try watching Unreal’s tutorial on animating cloth. It’s associated with the ContentExamples map of cloth, where a curtain is animated using a panner and a few other things. The curtain initially is moving at the top (where it would be still because it’s simulating being on a rod or fixed to something), and something is changed in the material editor and/or physics settings to set it to staying still at the top. It could be the cape is set that way and needs to be changed so it falls properly.

Is it an Apex cloth? Even if not, it could be the wind setting is enabled.

No this is still broken to me

i couldnt solve it yet.

You mentioned it’s “fully at 100 white”, so I assume it’s MaxDistance = 100? Then the issue might be that Max Distance value of 100 is not enough. Try painting higher value on it and see if it’s fixing your problem.

Edit: MaxDistance is basically a range a vertex can move when simulating cloth from it’s skinned position. So value of 100 just means a vertex can travel 100 units.

Talking about thinking outside of the box… Like a good boi i thought 100 was the max slider. That i didnt even try is… a sign of over usage.

lol, what a simple fix, yet easy to overlook