This is related to Sequencer.

What I want is for the Cinematic Viewport to accurately display the Filmback Settings (I have mine set to 16:9 DSLR) and for the cinematic preview to resize accordingly, within the pane. This would make sense to me - I want the cinematic viewport to be a 100% accurate preview of what the camera is seeing, according to its custom settings.

Instead, the Cinematic Viewport shows entirely different aspect ratios depending on the size of the Pane. Therefore, on my screen setup detailed above, the current Pane is something like 4:6 aspect ratio (this is a guess). This makes the cinematic preview I’m getting… a 4:6 aspect ratio. This is not an accurate view of my camera at all. Heck, even when I toggle Composition Overlays, it displays completely different Action Safe zones depending on the size of this Pane. The pane itself being 4:6 is fine, but what I want is for camera preview to only ever display 16:9 (with the rest of the pane filled with thick black lines). This way I get a live, accurate preview of my final video as I’m working. I’m currently getting level content shown as in the camera’s sight-line in this preview that is actually not getting captured by the camera, or the opposite.

Am I doing something wrong, or have I missed something here?

It should be working as you describe. Unless I’m misunderstanding. Here’s snapshots I just made with two different viewport sizings. You should see that in both cases of the cinematic viewport on the right side, the framing of the floor through the camera is the same. Maybe you can post what you’re seeing? 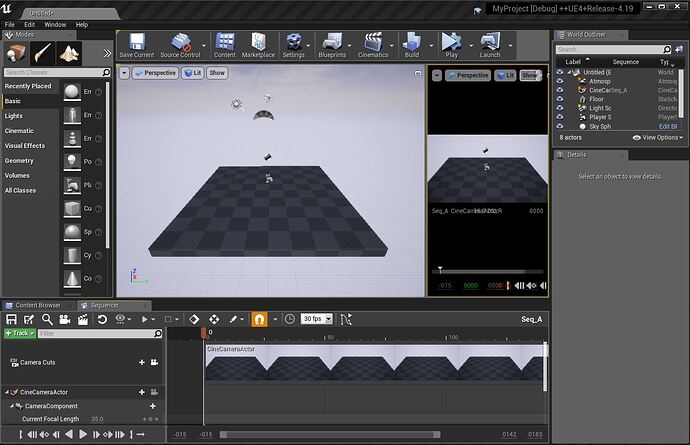 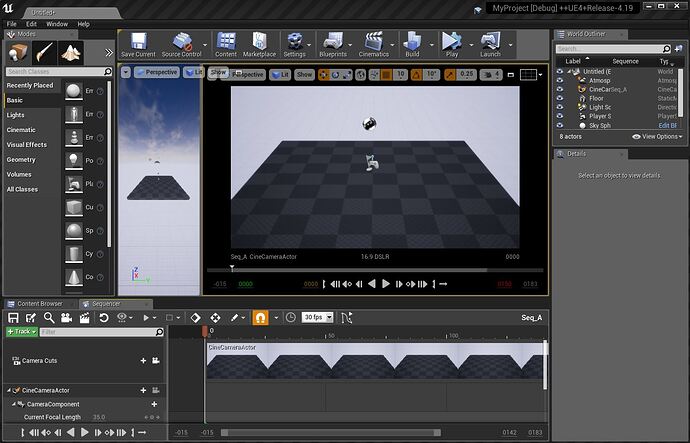 Hmm, just tried at home and instantly I got the same results as you (i.e. it is working as it should).

I’ll check at work again tomorrow and post here either way - it was seemingly not doing what it should be (unless I’m being a dolt), I just don’t know if I had done something to adversely affect the cinematic viewport’s behavior.

After talking with a programmer on our team, it seems they’ve done a bunch of stuff to the camera settings (that I don’t have any understanding of). So I’m not mistaken about the issue, but it’s something we’ll have to fix on our end. Thanks much for the help though!

Is the viewport toggle for “Realtime” on?