Hi all, I’m making a 2 player Anime style fighting game called Chronicles Of Eden based on a book. I have to create a functional demo with 4 characters with 8 moves each and 2 environments. Asset creation is no problem for me. But I do need help with blue print. The game is going to be like 3 3d street fighter games for now so i’ve started with the side scroller template and I’ve just finished importing and texturing the first fighter is I’m going to be posting my progress Regularly.

A shot of the first character in zbrush and UE4

what I have so far, lol. I Replaced the character blue print camera with a new camera that’s not a part of the character blueprint. So how do i go about attaching this camera to an object like the sphere in the video?

Haven’t dealt with the camera yet but I’m making some progress on some other parts. I’m having this problem, anyone out there who could possibly help me solve it??

this is my setup. I am not using the state machine ATM, but it has the same problem aswell. 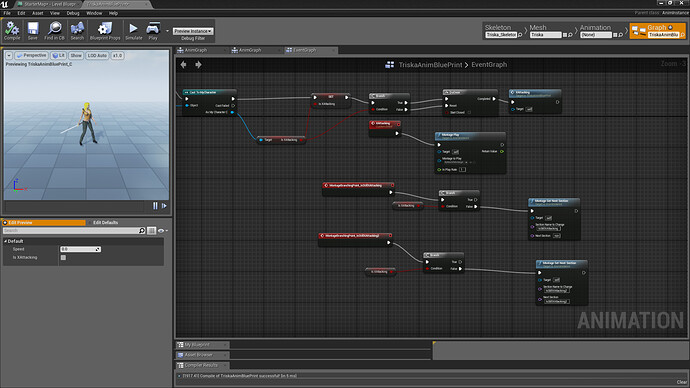 Working on a second character

looks nice ! is this an anime game of sorts… i have no idea how the character pipeline works in unreal yet. just started a few days ago. I will keep checking your updates to learn more :-). am sorry i cant help. but would love to see more of your concept impages and what you would like the overall game to look like.

Thanks space hawk, I’m glad your it interested. Yes it is an anime game. Stay tuned ;).

Finished Version, Not yet imported.

I’ve created 2 animation montages and 2 input actions for them, and created animation blueprints to call the animations, the first is with the X button which works just fine, the second is with the Y button which doesn’t seem to have a chance to fire, once the branch point below is reached leading to a do once, everything stops firing

unless X is Pressed, then it fires but stops immediately (because it resets I guess). I can’t get to the second montage to fire if everything stops firing at the do once node. Is there a way around this??

I resolved the above problem using the sequence node like so

Progress so far, I finally got 2 player working but with a lot of issues. I’ll explain in the next post.

Got some cool grass from this guy https://www.youtube.com/watch?v=QSrxFyEvfuY, it’s temporary because I’ll create my own but it’s cool

I’m trying to make players 2 use different character blueprints/pawns. This so this is my attempt to solve the problem, but it’s not working properly. The animation montages for the default player no longer play even though everything is firing. Here’s how I have setup, first to start with. Using create player node in my game BP, I create a second player. like so

And then in the level blueprint, using the possess node I’m able to switch player 0 and player 1 controller to 2 differen’t pawns that are on the level.like so 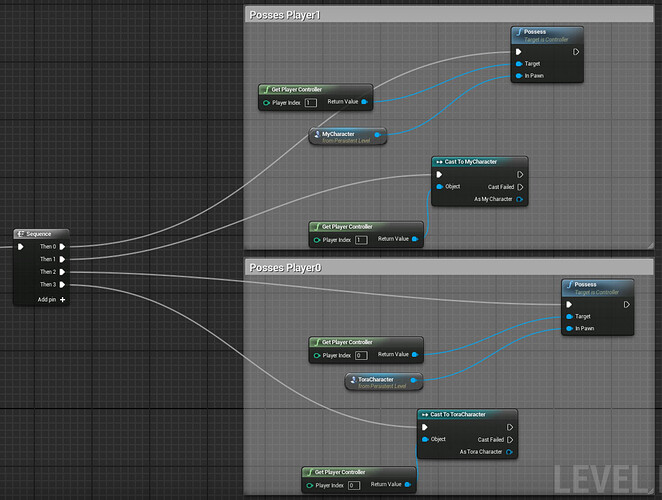 So Now I have 2 controllable Players with 2 different pawns/character blueprints. 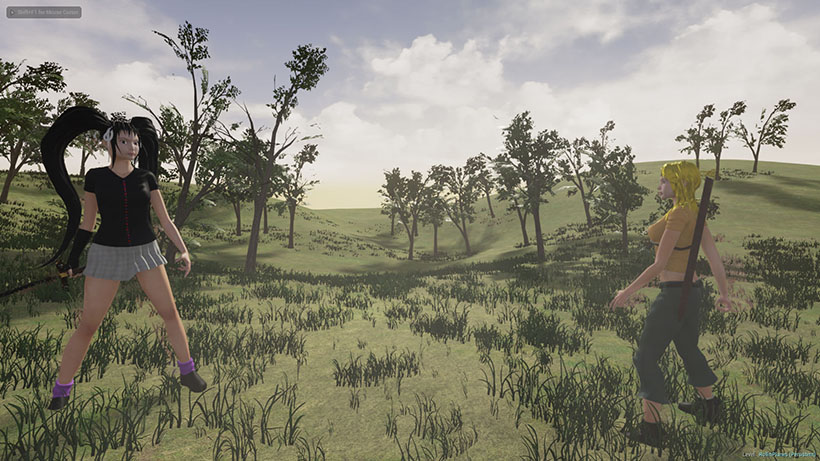 This is how my animation blueprint is setup.

Everything works when nothing has been possessed but if I posses a pawn with player0 all the montages stop playing even though they are firing. but they play with player1, Any idea why the animation montages aren’t playing an how to solve it? 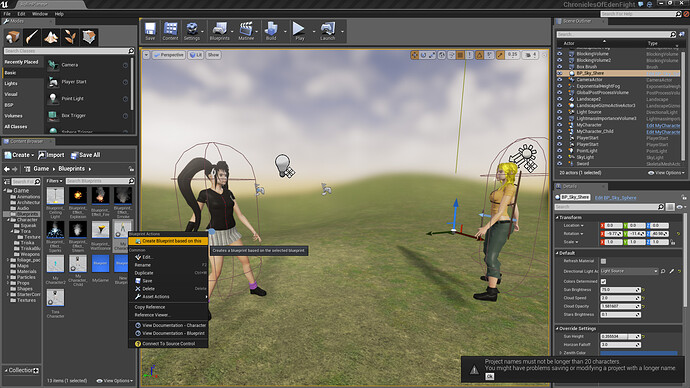 Then I can change the mash, and even the animation blue print and skeleton if I want. If I possess this newly created character/pawn that is based on the original character for the default player, everything works perfectly.Using duplicate blueprint or creating a new blue print won’t work if you want to use the possess node. I’m still pretty sure the origin of the problem is with the cast to character node, there must be some kind of conflict that causes the animations not to play. But anyway don’t care anymore, this is a good work around, now I can have different characters that I can possess that are based on the original character

I’ve been looking for ways to accuratley do hit detection for melee weapons, not too much information out there though, or maybe it’s just hard to find. I’m going to try and use line trace and maybe hitboxes for now, that way I can hopefully apply damage and unique animations depending on the area if the body that the weapon hits. 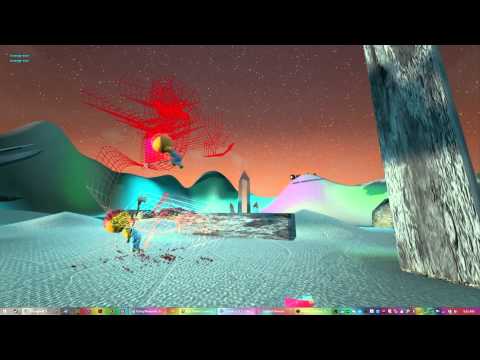 I think there’s just enough info for me to get started. If you know of any other ways I can do this, please share 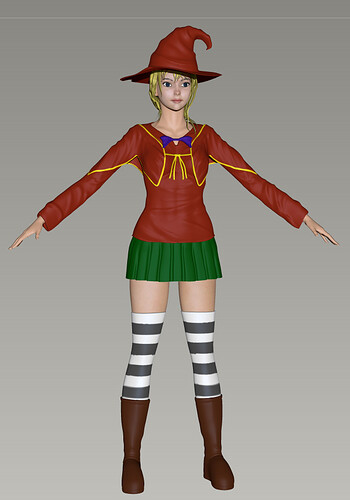 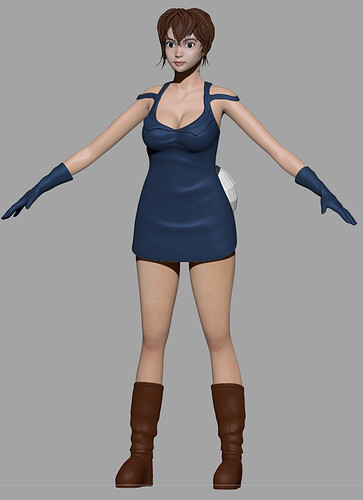 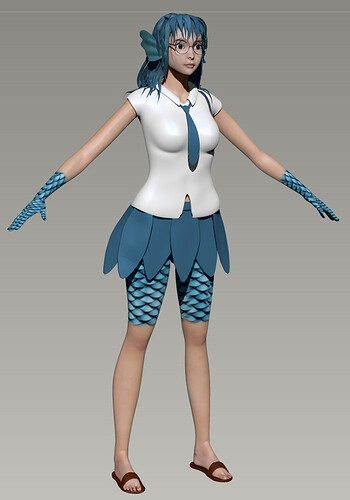 Got the line trace working at last, by getting the location of 3 sockets on the weapon (bottom, middle and tip) now its able to detect when the weapon collides with anything in the world, I had to set it to ignore the character holding the weapon though. It isnt actually difficult.

After lots of work, this is the first game play test

LATEST PROGRESS, LET ME KNOW WHAT YOU THINK

Latest progress, At The Moment the death system is not working, what a head ache.

Hi all, I’m making a 2 player Anime style fighting game called Chronicles Of Eden based on a book. I have to create a functional demo with 4 characters with 8 moves each and 2 environments. Asset creation is no problem for me. But I do need help with blue print. The game is going to be like 3 3d street fighter games for now so i’ve started with the side scroller template and I’ve just finished importing and texturing the first fighter is I’m going to be posting my progress Regularly.

A shot of the first character in zbrush and UE4

isn’t Chronicle of Eden a monster girl genes? If so you got my interest?������

would it be possible to get a basic tutorial on how you set up the local 1v1? I’m having alot of trouble getting 2 controllable characters on on camera to work.