Can this be managed, to keep working parent Tick?

Hmm i have now idea - to make blueprint function on parent like “tickFunction” and call it from Tick event on child Event graph, this could be one solution.

Is there some any other?

If you worked in C++, I would suggest you to call the Tick method in the parent class by saying something like ‘Super::Tick’. I do not know if there is a way in blueprints to call parent’s events like this.

yes, i have the same feeling. thats why i was asking for calling parent::tick().

anyway, for my problem, probably only solution is the BP function. i go on it now.

To get blueprint equivlent of Super::SomeEventFunction() that ErayT talking about right click even and press “Add call to parent function”

Exactly! I was preparing a video about it while you are texting this

lukas84 you can do such trick just like in the video if you want.

wow, so it really exists! now i see it! good! thanks

Oh god I was going insane! It just took me like 2 hours to locate the problem within that tick event and another trying to find why it wasn’t working.

You are my hero!

Thank you for the answer. You saved my hide!

I just add a custom event, Child Tick that gets called via the tick of the parent blueprint like below. 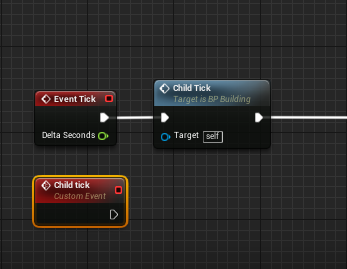 Than I add the Child Tick event in the Child blueprint. 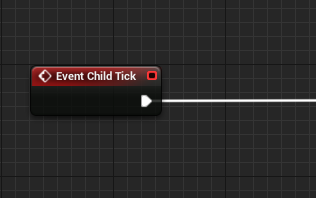