I’m getting this issue where the I have a blueprint of a bomb, that has a destructible mesh of a bomb as the root, with a particle (explosion) and a radial force as its children.

When the bomb drops and collides with the ground it should trigger the explosion particle and be blown apart by the radial force, however this is not the case. When the bomb collides with the ground, the explosion remains in the bombs original position and the bomb itself if still intact indicating the radial force hadn’t moved either.
I would think the children would have followed the root, but it doesn’t seem to be the behavior I’m experiencing. Any clues to what the issue might be?

Thank you for the report. I was able to reproduce what you are seeing. I have entered it as UE JIRA-6826 in our tracking software and our developers will be investigating it further.

However, there is another way to set this up. You can set the Explosion particle system inside of the destructible mesh. In the Destructible Settings tab > Effects > Particle System. You can even add the sound there as well. 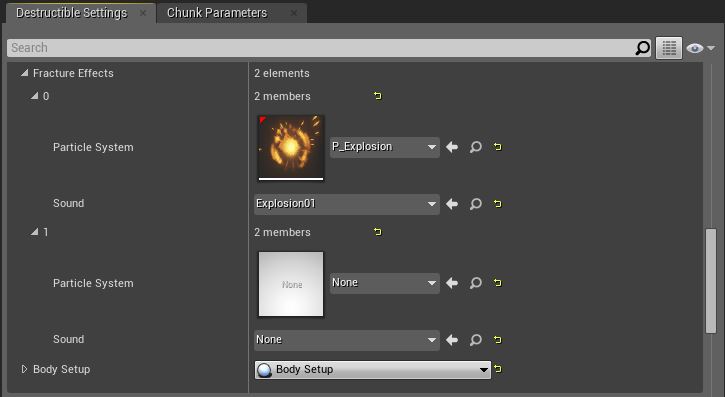 You can add the impulse by using an Apply Damage node and trigger the impulse off of the Event Hit. 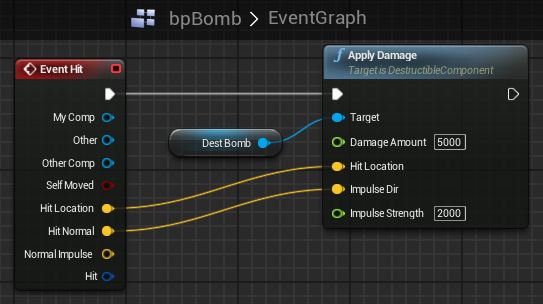 Thanks TJ! It works beautifully! I think the method you showed is actually better than what I was attempting to do. Much less visual script in the Event Hit than what I had.
Now the issue I have is to do with the bomb fragments. They bounce around for ages as if they are made of rubber! Lol. It looks kinda funny. They don’t behave like debris at all. I’m not sure how to change the functionality, but at least I have a bomb that explodes. Thanks again.

I’m also seeing that same behavior. I’ll be investigating that and let you know what I find.

Awesome! Thanks so much.

I just tested this in our latest internal build. It is now working correctly for us, so you should see the infinite bouncing effect fixed in a future release.

I am finding that child target points don’t follow root component in Blueprint - is it a by design of target points?
To imagine a big moving ship and has several target points in it. The rest of child static meshes move as expected with root.

What version of the editor are you using? Also, please post a screenshot of your Component hierarchy and blueprint setup.

I use 4.8.2 right now (retested with 4.8.3) and not a ship what I am doing, but a crane and the operator has to reach targets on it while the crane is in operation 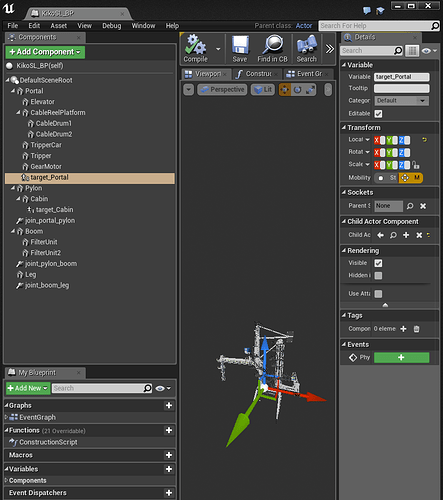 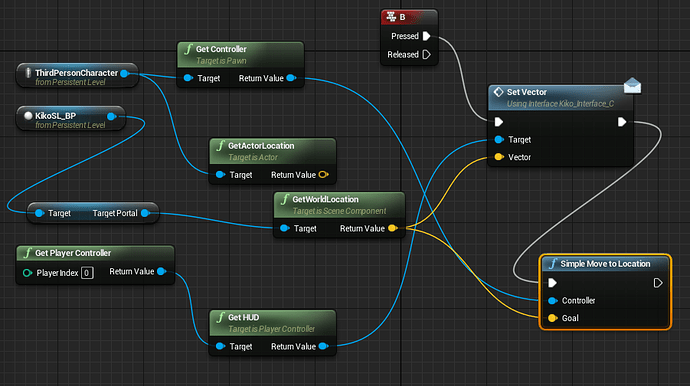 Or maybe the navigation mesh is not rebuilding dynamically? How can I check it in play mode?

You can press ~ and use the console command ‘show Navigation’.

With the RecastNavMesh selected, in the Detail panel > Make sure the Runtime Generation is set to ‘Dynamic’. Does that work?

I could not find a way for this on a German keyboard. In Blender3D it toggles all layers visibility and I miss this with German layout. Is there another key for that? Or where to change?

You use a ExecuteConsoleCommand node in blueprint on a EventBeginPlay. That will do the same thing.

Thanks, TJ for the cool tip!
May I share the fbx file with the engine developers to see why navigation mesh fails on this geometry and why it keeps red rebuilding without any movements in dynamic mode?

It would probably be best to create a new report in the Bug section and include the screenshots and info from here along with the fbx. That way it will be easier for us to track.

I moved it over to our Bug section so it will get delegated out. We’ll look into it.