Character vibrating when it moves

I’m using UE5.0.3
I’m making a game that uses a ball character. It’s movement system uses angular velocity in degrees. My problem is that for whatever reason my character will start vibrating like crazy whenever I move. This is my first ever project, aside from a few tutorials, and I don’t know what I’m doing. Please help! 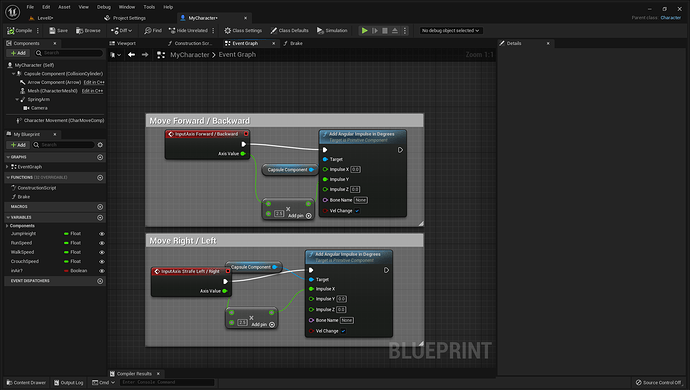 What you are doing may just be hindered by Chaos.

So you’re saying it’s just a side effect, and that PhysX is just not advanced enough to avoid this?

The opposite. Chaos is the absolute worse change they forced on the engine.
PhysX should work fine.

Is there anyway to disable Chaos and replace it with PhysX without changing versions?

No. You have to build the engine from source and its getting incrementally harder as they are gutting out old hookups so it will no longer be possible…

So the only way I can fix my problem is to design a physics engine of my own?

If that’s the problem, then yes.

Have you verified there is no issue in ue4 with the same set up?

You can always pay for Havok, or use a different engine too…

I got a pretty stable version running under 5. I set the sphere collision to be a PhysicsActor. Set the sphere collider to simulate physics and did the same setup input-wise. Zero stutters, just rolls in the arrow direction.

Could be a machine limitation of some sort like substep being off or bad input being passed into the function then.

if you are saying chaos is working OK with the same setup.

Its not like it matters really, with its pefrormance being around 75% worse than PhysX there is no point in developing anything physics driven in 5…

What do you mean when you say you did the same setup input wise?
I’m sorry I’m really new and have no idea what I’m doing

I mean I used the same way to pass in the add angular impulse in degrees.

When you say “Sphere Collider” you mean the objects that the sphere touches, right? (Like the floor or walls)

Are you saying I need to take all my code from my character and put it into a new actor that is a pawn this time instead of a character?

The capsule collider is part of the character and the root component of the class.

I dont think You have a way of disabling its collision while having a sphere collision as its child.

No, but a capsule can be a perfect sphere.
That’s the point of a Sphiel…

So basically I need to check simulate physics for my character mesh, capsule collision and make both of their collisions PhysicsActors
Right?