Character takes up too much UV space/materials

I have made a character that will be used in a school game project. The character is quite large (area wise) and is currently taking up around 4 uv tiles or in other words 4 materials inside the engine. The game is a FPS where you play as two characters constantly switching back and fourth between them. So this means that this characters arms, hands, crane and tank treads will be seen up close in the FPS view. And when we switch characters the other character will be able to walk up to him very close etc. (The human is just for scale reference). 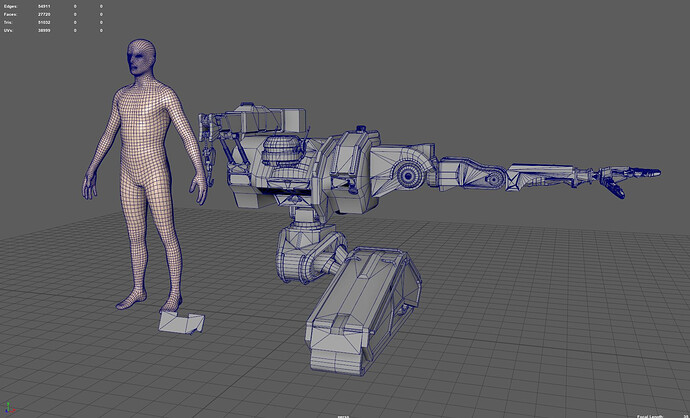 We have decided to go for a texel density of 10.24 with 2k textures for both characters. I was planning on having both arms and tank threads unique at first, but If they were my character would sit at around 5-6 uv-tiles/materials. I have read that it’s quite common for main characters to have 2-3 materials and such, but those forum threads were quite old so I don’t know where the situation stands right now.

Is it way too much to have 4 materials for a single character like this one? Should I aim for a lower texeldensity? what can I do in a situation like this?

Alright. that’s good to know. I was turning my head inside out trying to figure out how to solve this.Thanks.

I know this very much depends from case to case, and that it might be hard for you or anyone to answer this… But what would be considered too many unique materials in unreal for a character such as this one? If I now were to make both of the arms and the treads unique the robot would land on around 5-6 tiles. would that also be regarded as fine?