video is linked below . https://www.reddit.com/r/unrealengine/comments/bvd4fz/player_is_sliding_off_moving_platform_it_is/

I think you have answered your own question here. You’re getting attached to the platform so you begin to move at the same rate as the platform. Maybe you could show have it’s done?

Just for the sake of it I created a moving platform. It just moves up and down at the intervals but you could also set it up using target points in your world to get them moving in various directions. Won’t say this is the best way to do it since I’m not a pro but it works for me.

Could be the case of your character colliding with something that drags him along too, don’t know your exact setup.

You want to create a new blueprint actor, open it and add cube component and set it’s scale to (2.0 - 2.0 - 0.1) so it looks like a platform and then have a look at the image attached. I found these nodes just now, maybe there are other ones to play with or someone will point out a better way to do it. Place your blueprint actor in the world and try it out.

If you want them to go from side to side just use x or y axis. A while ago I have seen a tutorial on something like this maybe I can find it, I’m sure it used target points to move them from point to point.

Hope you will find it useful. 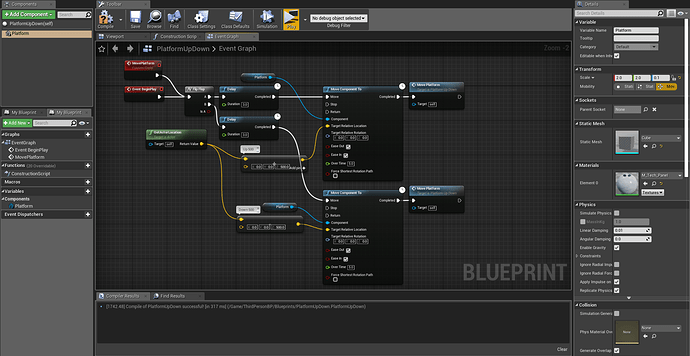 Do you have discord by any chance?

can you help me learn blueprints cause i’m really new

Learning blueprint scripting does take time, especially if you are not a programmer or don’t know anything (or much) about it, like myself. Just keep going through some nice tutorials that are out there.
Take your time to understand why things happen the way they do. Use comments, they will help you out in the future. If you just end up coping code it probably won’t work as you won’t be able to reproduce the effect you had before. Don’t be afraid to experiment, change values, swap connection to nodes and use prints string to see which part of your code if getting executed. This is useful when you have a bigger script for example uses functions or external functions (from other blueprints).

You could start with a runner game, there are plenty tutorials, then maybe something more complicated like health bars and basic widget building before you move to inventory etc.

You can always come over here and ask for help with specific problem. There are some great people out here that really know a lot about the engine, the nodes, and genuine game making.

I recommend you check @Nebula Games Inc Youtube channel. He has some great videos for beginners. I watch them sometimes to, just to clear things in my head and make sure I understand.
Link to playlists for beginners as well as random ones that address a specific topic.

I know some of these videos about stuff like variables can be a bit boring after a while, but it’s good to build solid bases, so you can expand you knowledge without stumbling into some silly problems because you didn’t cover the most basic thing.

This post was way longer then I planned it to be, sowwy.

I attached my player character twice to the moving platform in two separate blueprints causing this bug. After removing one of the attach nodes the problem has been resolved.

Please mark your solution as correct to close this question.