Character not triggering anything in level

So far I’ve posted variations of this question on several UE forums, Discord channels and groups and no one has been able to find a solution. It’s been several weeks now, so I’m really hoping someone here can help.

There is a Persistent level (P) that loads when the game loads. The P level contains the thirdpersoncharacter and playerstart, as well as a trigger volume and a trigger box (either of these are supposed to open Level Map 2 ‘MT-TAR-LOW-OLD-001-002’).

(I also tested this with a streaming volume, but it didn’t work either. Plus I was informed that streaming volumes don’t work as well as trigger volumes with published games).

The P level loads an empty level called Darkness that blocks out the game UI while the start menu widget is displayed.

The Darkness level then loads a start menu widget (to choose a saved game, start a new one, create a character, etc).

On the last screen of the start menu widget, pressing the Test Animation button (basically save character) loads the IntroAnimation level map.

The IntroAnimation level map loads a widget that runs an animation for the game start.

The first map loads fine and the character is able to run around. However, when the character crosses either the trigger volume or the trigger box, nothing happens. It should load level map 2 ‘MT-TAR-LOW-OLD-001-002’. But it won’t even trigger a print string.

I think this is something to do with the levels being loaded prior to MT-TAR-LOW-OLD-001-001, but I’ve tried multiple ‘tweaks’ and so far nothing has worked. I get the same result in stand alone or PIE. Can anyone point out what is going wrong?

*I’ve added the screenshots in one image, as the last question I uploaded wouldn’t allow me to attach all the relevant ones individually. 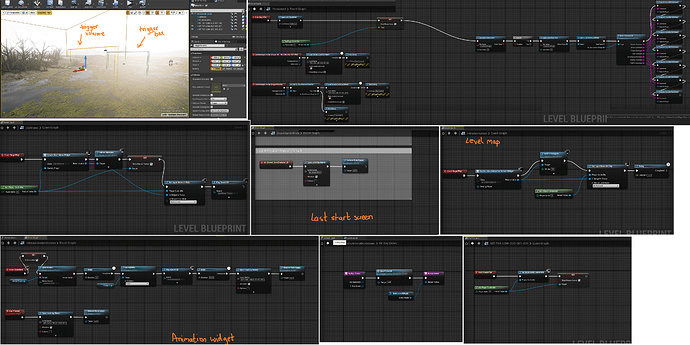