Character is climbing in mid-air during ledge climb

I am on my second climbing system, this one from Ryan Laley. When attempting to climb, all my character will do is jump to the wall / ledge and perform the climb animation in mid-air, no actual movement. I have all the root settings enabled in both the animation and the animation BP. This is just for the ledge climb, the actual climb doesn’t work at all. If I can figure out the ledge climbing, the actual climbing setup it should fall into place.

Ok, I somewhat fixed it. The original problem turned out to be the animations themselves. They were In-Place animations. Once I reparented the Root Motion version, it now works for my default skeletal mesh, but not my alternate meshes for some reason. When I disable root motion, of course the animation moves the character up (through any obstacles then snaps back. However, when root motion is on, the character just climbs in place then drops back to the floor. Root Motion For Everything is enabled, and again it now works for my default skeletal mesh. The Alt Meshes are duplicates of the main mesh with identical but separate animations. 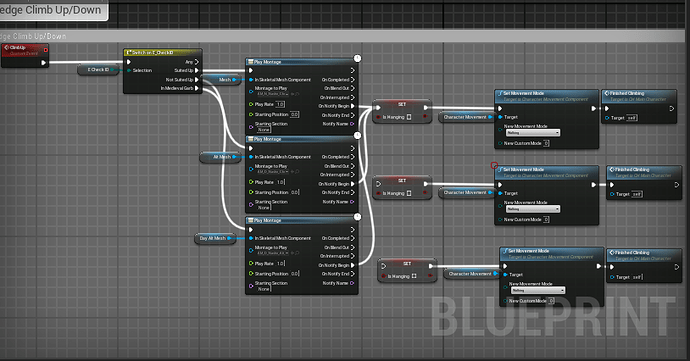 Ok, I just did a test. I switch the skeletons. Now the second skeleton, that didn’t work on the Alt Mesh, is working as the main Mesh. So the problem does seem to be with the Alt Meshes themselves and not the animation. Now figuring it out, if it’s even possible, is the key