My character is standing on the top edge. Its really hard to explain so i drew a quick representation and made a video. I think its the Collision shape being a capsule. 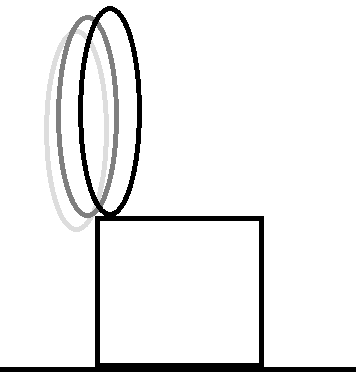 The lightest capsule is where i can stand still without falling. Then when i move to the Right it makes me go Right aswell as up till im standing on the box.

In your CharacterMovementComponent, there’s a value called PerchRadiusThreshold, which determines how far off a ledge a player can perch. Adjusting this value upward will solve your problem; the higher the value, the greater the distance from the capsule’s horizontal edge that is “standable” capsule. At a value just equal to the capsule radius, the bottom of the capsule must be on a ledge to stand on it; lower values give more edge-sinking leeway, with a value of 0 letting the player effectively cling to a ledge with the furthest edge of the capsule.

So i went and checked it out with 10 perch then 50 then 100 and finaly 1000. It did stop me from standing on the side of the edge, but it made me slowly slide off where i could previously stand. Which is not what i want at all. So im think for what i want it would be best to change the collision shape for my character to a box is that possible? My games enviroment is all boxes (Like minecraft for example)