Character can't move when placed in a new location

are you moving just the mesh or the actual character? how do you handle movement? are you destroying the character at all or just moving it (looks like just moving)? are you changing anything in the player controller? how often are you setting the location? do you reset the lava hit bool after moving the character?

i would guess based on the limited information provided that you are checking lava hit on tick and not resetting the lava hit variable. but thats just a random guess since theres not much else to go on.

haha its always those small things. does it work now?

Note: the new location is in midair. 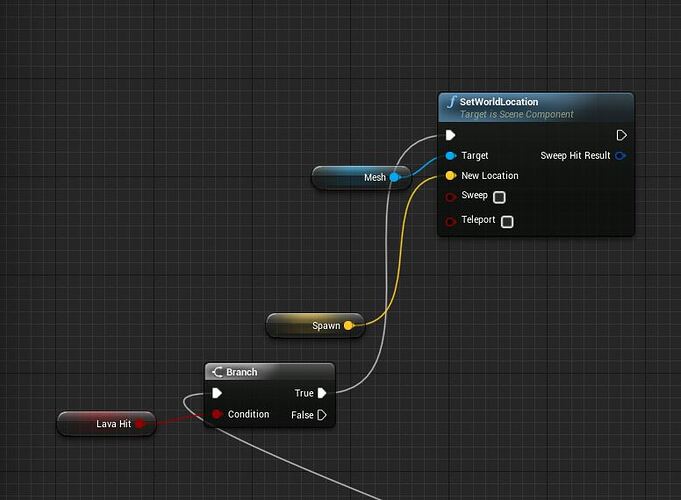 OMG I just realized how unobservant I am. I forgot to reset the lava hit to untrue.

it sounds like your still setting the location but again without seeing the script its hard to say.

I am setting the location of the character

I could show you a picture of the begin overlap event:

Another problem I found was that the D and A keys for moving right and left rotate the entire map. Note: All of these error happens after I step on the lava 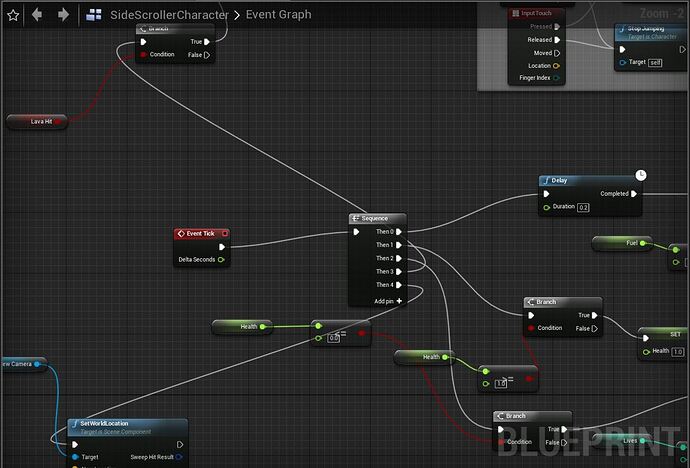 the code im interested in is what comes before the set location. basically the rest of the first picture you posted. your input is moving your map? you mean like the level itself? thats really odd

ok for the lava part i would eliminate the part that comes from tick as its not really needed and its just wasted performance. instead i would set the location just after the cast where you overlap event is. basically instead of checking is lava hit true 30-120 times per second, you just say when the player overlaps the lava im going to move him. its much simpler and better performing. dont know if that will solve the issue completely but its a step in the right direction.

as for your other issue you will need to explain whats happening in better and more clear detail. show the inputs so we know how they work and maybe make a video or something so we can see the issue your talking about.