I’m struggling with changing visibility of an element being a part of a TreeView item. My item layout looks like this: 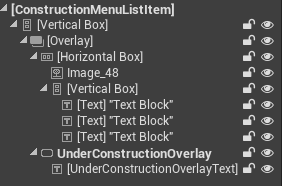 Note UnderConstructionOverlay element, which has visibility set to Hidden.

I tried to change its visibility to Visible in a BP as reaction to an event like this:

image895×234 44.8 KB
I can confirm, that the event is fired(confirmed with Print String), but still, visibility of the item is not changed. I tried several different solutions:

Yet nothing works. I assume there’s some unique way in which TreeView is handled, but isn’t there an easy way to change appearance of its items?