Hello everyone. First i wanna say that im new in ue4 and blueprint so i don’t know much about it.

I created and imported this guy in the engine and now i want to change the material of his shirt in another blueprint. My problem is, i don’t know what to target when setting the material. 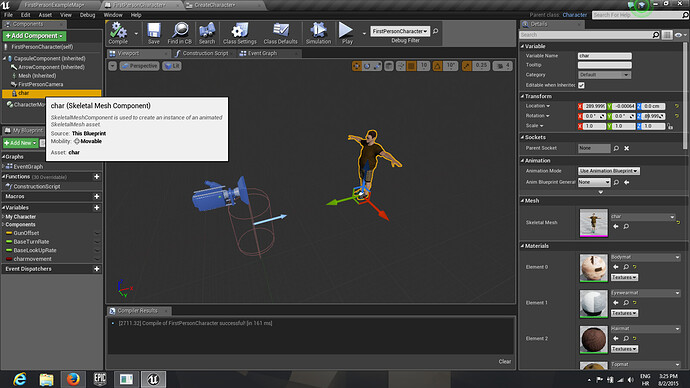 This should be a simple way to fix it. As far as I know it should work, just follow the steps below.

-Get player pawn
-Cast player pawn to FirstPersonCharacter
-Drag pin off the return of the cast and get char(Your skeletal mesh component)
-hook char up to the target and it should work!

I’m now having this error: 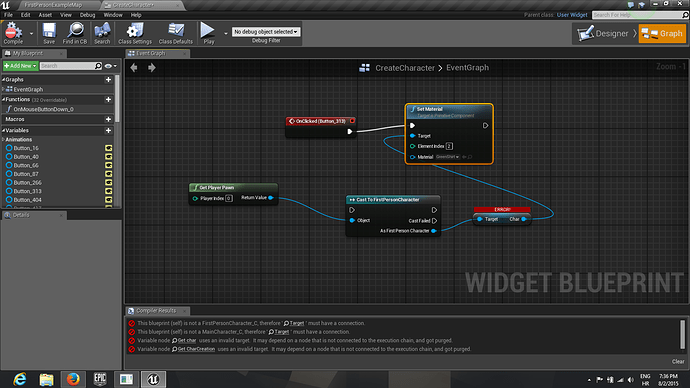 Just ignore this “get charcreation” error, that has nothing to do with this-

Currently, your cast isn’t actually doing anything as it isn’t receiving an execution. You will either need to convert the node to a pure cast so it doesn’t require the execution, or plug the cast into your execution chain before attempting to alter the material.

Hello Adam. Everything is working perfectly fine now. Thank you both for your help!

Since you said you were new I thought I would check: are the materials you are trying to switch between essentially the same thing but with a different texture sample or number value somewhere? You can make a material instance to save on compiling shaders if they are