so as you already know, UE4 has a white default playermodel. what i would like to do, is to change the model to whatever i want, but still keep the default animations.

i have tried exporting the ‘SK_Mannequin.uasset’ file to a .FBX file and then opening it in blender (so i can change the model however i like). but, as i try to import the Mesh, the model imports fine, however, the skeleton is wrong: 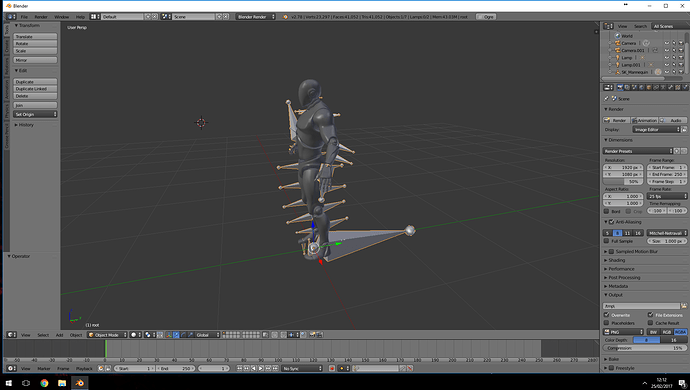 this is highly frustrating and i was wondering if there is way to fix this. am i exporting the .uasset file incorrectly from UE4, or am i importing it into blender wrongly?
your help would be very much appreciated, thanks.

I am looking for a solution to this as well. Any help would be appreciated.

so far i am still having problems but even though the bones look pretty messed up, leave them like that, or it makes things even worse. make your model around the skeleton and then export it from blender (make sure you turn the smoothing option on to anything other than the default option)

i just posted a new thread about my most recnet problems with changing the default model, but so far i have most of it working (*once i get all of it working i will probably make a youtube video and link it at the top of this post

Exporting from UE4 to Blender (at least the default models) seems to be quite a pain. If you are just after the default animations then i had more luck with just making a new character in Makehuman (or so), rig it with the UE4 skeleton, import into UE4 and then retarget the UE4 mannequin animations to the new character. Takes a bit of tweaking and mapping, but results are quite OK. Keep in mind that the mannequin has quite a bit of different body than a casual human, so not all animations look that great on human characters if you just retarget them.

Is there any chance you could make a tutorial for this animation retargeting?