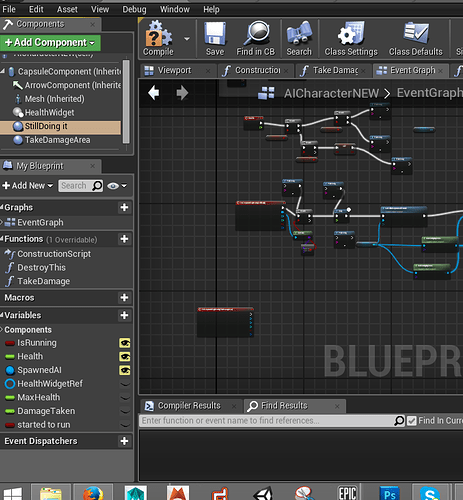 I was unable to reproduce this issue on our end with the information provided. I have a few questions for you that will help narrow down what issue it is that you are experiencing.

UE version is 4.7.5… Event did not happen in a clean project.

Can you provide any additional information that could help us reproduce this issue on our end? Was this project one that was updated from an older version of the engine?

I’ve had this problem several times and was able to reproduce this. Just did this in the Memory game example. What I did was:

Then if you look at the BP_ScoreBoard the events for BackToMenuButton changed to whatever name was changed on the other blueprint and they no longer function.

Could you tell me what version of the engine it was that you reproduced this issue in?

I downloaded the 4.8 version of the Memory Game and could not reproduce this issue with the information provided. Were there any small steps that may have been left out?

I just created a new project for the Memory Game and here are some screenshots of what I did to get the error. Starting in pic 2 in BP_MenuMem blueprint I create a box collision with name BackToMenuButton and then compile. pic 3: I then change it to Box and compile. pic 4: then looking over at the BP_ScoreBoard blueprint you can see the events changed from what they were in pic 1.

I was able to reproduce this issue on our end. I have written up a report ( UE-20325) and I have submitted it to the developers for further consideration. I will provide updates with any pertinent information as it becomes available. Thank you for your time and information.