I am spawning a string of 3D letters with blueprint. The issue comes in since they are stacking to the right of the origin. Which is great for setting up the kerning, But I need the strings as a whole to be centered on the origin of the blueprint.

I thought so, but when I tried it would only return a value of 81 units for anything below 5 letters, and then jump to 120 for 6 and anything after that would add 1 or 2 units. Very strange.

Alternatively, you can use a font with equal character sizes such as Lucida Console.

Unfortunately I am using many fonts, which the user can change at any moment. Making it necessary to get the length of the string dynamically and move it the opposite direction by 1/2.

I have a transform that returns the position of the last letter. Maybe I can measure the difference between the origin and that transform.

Alright, Got busy with other things. Here is where i’m at. 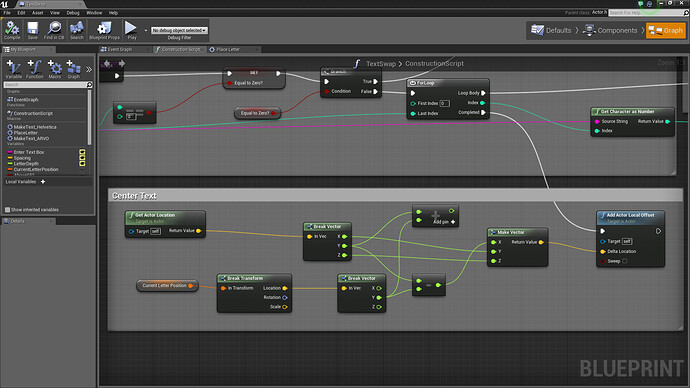 I am attempting to subtract the location of the last character in the string from the blueprints location.

Which is working (in that it is moving the actor in the right direction) But it is moving it far to much. Like off onto the horizon, when I need it to move a few centimeters.

I think it may be an issue with converting local units from the letter position into world units for placing the blueprint actor. I don’t know if there is some kind of conversion for those.