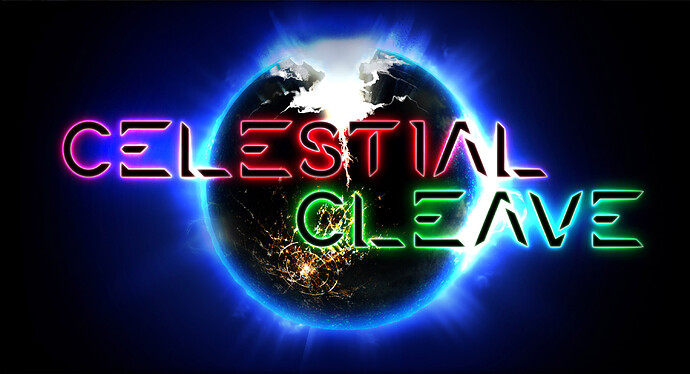 Celestial Cleave is a deeply strategic, turn based game with an emphasis on unit positioning in a 1v1 multiplayer scenario. Its a slow paced cerebral game heavily inspired by a classical Japanese board game “Shogi”. 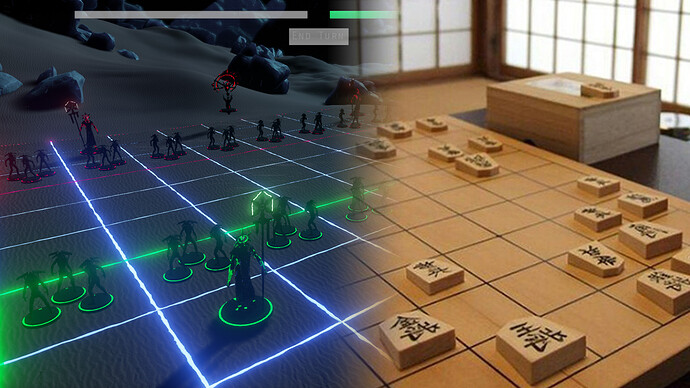 Through the medium of video games we are able to liberate the fundamental concept of Shogi and make it easy and intuitive for all players to understand as well as introduce new elements such as new game modes where you as the player have control over your starting formation and unit types. Eventually we plan to introduce new unit types with passive abilities that affect the battle field and the units around them. 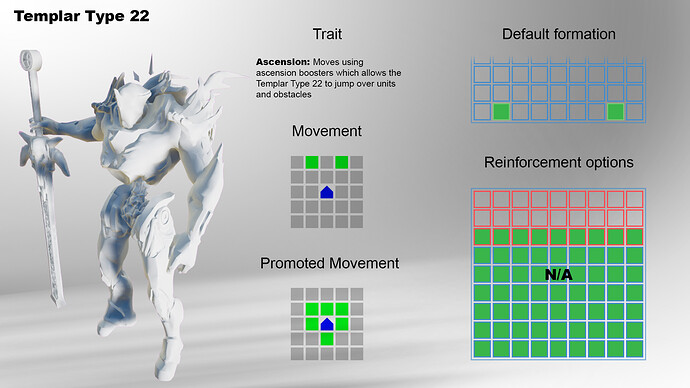 The fundamentals of the gameplay are built around 3 pillars which sinergise to form unrivaled strategic gameplay solely determined by your skill and wit as a player. These 3 pillars of strategy are:
Unit Movement. each unit will be able to move around the battlefield in a predetermined manner that is clearly displayed to both players.
Unit promotion. In the event that a unit reaches the enemy territory at the far end of the battlefield the player can chose to promote this unit, adding new movement options to that unit.
Reinforcements. If you destroy an enemy unit by moving to attack it you will gain an equivalent unit for your army in your reinforcement pool. On any subsequent turn you can place this new unit in an available position on the battlefield instead of moving one of your units.
To be successful as a player in Celestial Cleave you should keep in mind your opponents movement, promotion and reinforcement options as well as your own.

Celestial Cleaves Sci fi setting allows us to build rich environments around the gameplay and interesting lore around the factions in the game expressed through the individual units on the battlefield. we plan to have multiple maps or battlefields in the game each with different movement grids and set in a variety of local the first is a mysterious alien world where a battle to decide the fate of hidden subterranean outpost is to be waged by the 2 players. This is the standard Shogi style 9x9 grid. 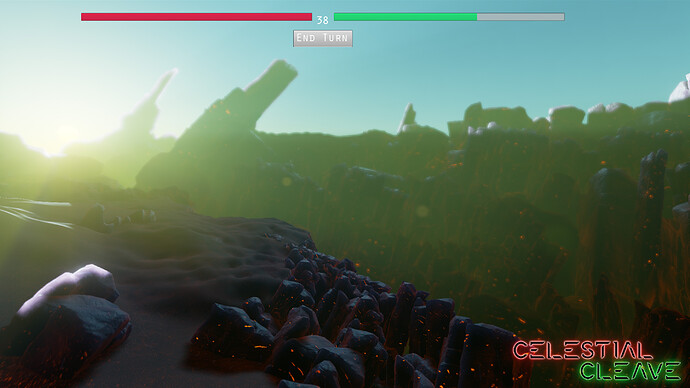 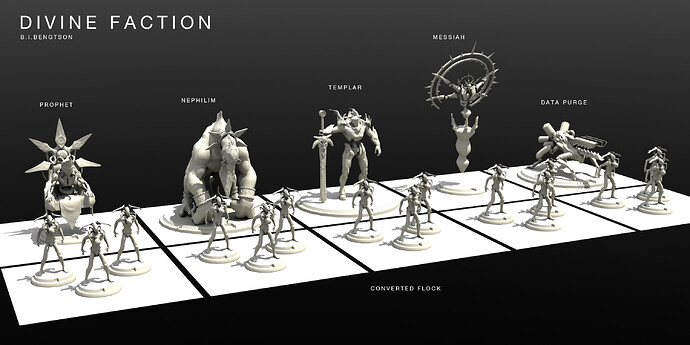 Through the lore surrounding these factions we introduce themes to the players that explore plausible futures galactic conquest, the evolution of modern day religions and how our actions as a species in todays modern era could have severe galaxy wide consequences for eons to come.

The Guys Currently working on Celestial cleave have been working diligently for months to get the project to the stage it is at today. They are:

We at BlueBlaze Studio want to open the doors on our game development process as well as other areas of game development and organising of a game development company. This forum post is part of that effort. we want to show players, other developers and anyone else who is interested how games are made by us as we think this inside knowledge could be really useful to many different people and also could allow those with ideas and criticisms or those that want to offer us assistance to approach us with a better understanding of what we are doing and through more channels. Our hope is that this will result in much better games.

If you’re interested in following the development we do a regular game dev Livestream “Dev Time with Dean” every Thursday at 21:00 GMT We try to keep it varied so one week it may be focused on a spicifc area of the game and the nex may have multiple people on talking about what they are currently working on.
You can watch Live each week on thursday 21:00 GMT here: http://www.twitch.tv/blueblazestudio
You can also catch up on missed episodes on youtube here: https://www.youtube.com/channel/UCivCg5_w2-T0_EMThblUGQQ

We plan to post regular updates here as the game develops and will try to keep the conversation flowing on this forum thread.

Thanks for your interest in our game Celestial Cleave

Here is the latest episode of Dev Time with Dean, where a bug almost breaks me as well as the game

Thanks, I’m planning on checking out some of your blueprint tutorial videos when I get some down time, your combat system looks great, maybe I can learn a thing or 2

Got any Kick starter or Greenlight advice?

Thanks, I’m planning on checking out some of your blueprint tutorial videos when I get some down time, your combat system looks great, maybe I can learn a thing or 2

Got any Kick starter or Greenlight advice?

Thanks for the advice. Were planning our Kickstarter atm, I think its one of those things where you just have to put it out there and see what happens + do what you can to maximise your chances.

Here is our GDD for any one who might find it useful. Its still very much work in progress and from my experience GDD’s are never truly finished as they are always adapting with the game, but they are a great tool for fleshing out, clarifying and nail down ideas. also no one really wants to read through a long convoluted Document so I try to get straight to the point and keep it as short as possible as well as clearly laid out so different people can go straight to the sections that are applicable to them.

Making this public is unusual but its all part of our effort to open up as much of our development process as possible.

The latest episode of Dev time with Dean which streams live on Thursdays at 21:00 GMT is now on Youtube: http://youtu.be/FQT7OUnR2Tw 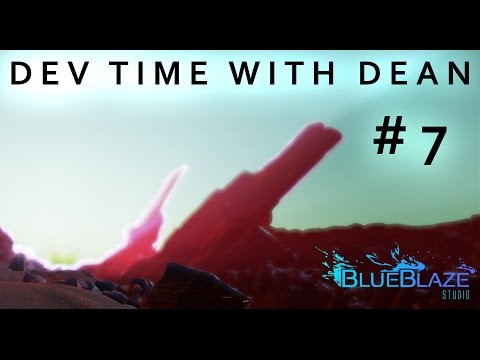 Here is the latest Dev time stream on youtube. I give an overview on Super Magic Missile Man and then do some live blueprint scripting to create an actor to deliver lore in Celestial Cleave using a cloth skeletal mesh hooked up to a wind actor controlled through a sand storm blueprint. 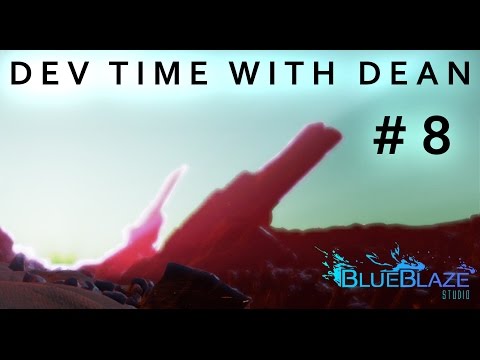 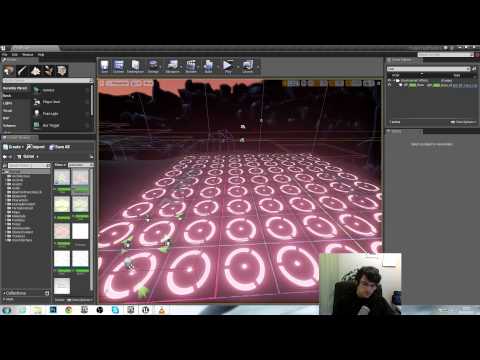 We have Just launched Our KickStarter for Celestial Cleave. It is simultaneously extremely exciting and unbearably terrifying. This is when we find out weather all of our hard work over the last 9 months has been worth it…crikey

We would really love the support of the unreal community. If you would like to support us in our endeavour please check out our KickStarter and pledge what you can, Vote on our GreenLight Page and tweet + Facebook post about Celestial Cleave using our Kickstarter link: http://kck.st/1y4Rzro. A single tweet can go a long way sometimes. 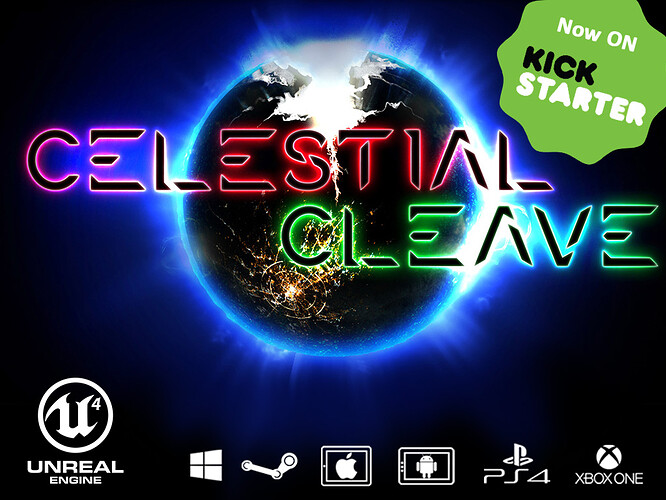 Shogi for the win…great job…

Feel free to chuck out a few tweets about the Kickstarter