What is Cattle Snatchers?

Cattle Snatchers is a 1/2 top down shooter game in which you have to protect your cattle from an alien invasion.

*The year is 1851. John “Deadeye” Wesler, an outlaw has finally settled down for a peaceful retirement in the far west.

He spent most of his “well earned” cash and treasures on a farmhouse and some cows. 6 cows to be precise. Their names are Julia, Francine… ah heck! You don’t care about their darn names.
Anyway, John didn’t care much about anything anymore either. Right, up til some E.T.‘s decided it’d be a good idea to park their saucer in ol’ John’s backyard.

Now John didn’t know what to make of it at first. Could it be that he’s been away from society for so long that them rangers got theirselves some fancy new equipement?
Well, it didn’t matter much to John as soon as he figured out that whatever these things are, they sure as hell ain’t bullet proof.
But he must have made someone really mad, cuz all of a sudden his entire farm was surrounded by these flyin dishes.
Good thing John hasn’t got rid of all his old time equipement yet!*

So yeah, that’s the little intro for the game. Hope you liked it.

The game is an angled top down wave survival game. Kind of a hybrid between tower defense and zombie survival. Every few seconds a new wave of aliens spawns. Every wave has a chance to spawn either snatchers or soldiers. The snatchers go straight for your cows. Picking one of them as target and clawing through your fences to get to them. The soldiers, however are more interested in harming you. But be ware, because when the snatchers get a chance to hurt you, they will not hesitate. And when they are out of cows they will also focus their attention on you.

But of course you are an outlaw, so you know how to defend yourself and your cattle. At your disposal, you have your two faithful peacemakers and some leftover dynamite sticks. You can also click your left mouse button to perform a melee attack to keep the enemies away. (this feature is still being worked on)

As the aliens damage your fences, you will see them become more and more red until it is destroyed and they will be able to get to your cows. But, you can repair them by hovering over a broken fence and pressing F, if you have enough scrap that is. Scrap and dynamite are random drops from enemies you kill.

Right now i have almost all the core gameplay finished and i’m about to start on the graphics for the game (models, textures, animations, particles, HUD graphics, more and better sound, …)

I’d love to add multiplayer to the game. Being able to defend a farm with 2 people would be pretty cool. Even with unlocks and a basic level system perhaps. But yeah, very distant future, if it will happen at all. Don’t get your hopes up (yet) 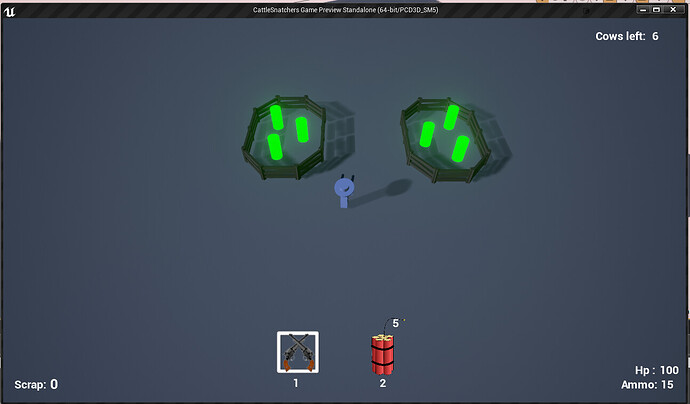 NOTE: To close the game press alt-f4 (Still have to implement escape to close, sorry :P)

Please, if you spot more bugs or want to share your opinion, do NOT hesitate to do so. This is my very first Unreal project and i want to polish this one as best as i can.

I’m still a very big newb when it comes to working with Unreal, so any tips and tricks or help are more than welcome!

Not much of an artist, but made a small sketch for the main character model. 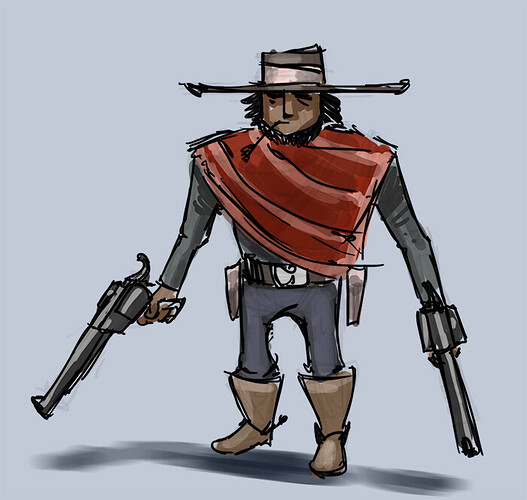