casting/messaging to other blueprints specified in "open" variables?

I’m trying to make a system that can dynamically turn on and off clusters of lights and objects to simulate domotica.
However after making a button panel i thought about sending messages or casting to clusters/arrays of objects previously linked to in the open variables of the construction script.

This way i don’t have to make 20 different blueprints for 20 different rooms, the idea is to just have a controlpanel with a few buttons that can be linked to lights/appliances specified during the level creation, from a dropdown or with the eyedropper or something similar.
All of the blueprints i want to send signals to already have the nodes in place to let them perform the actions, so currently the problem is with sending them a message. 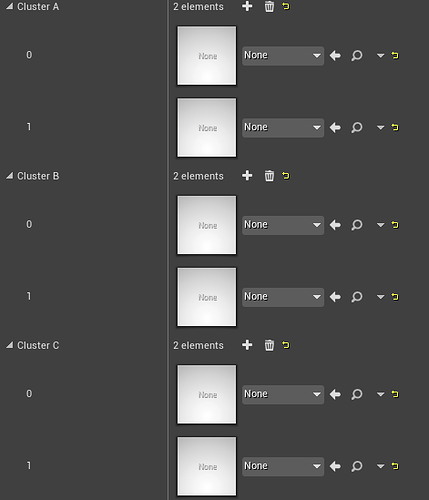 To be more specific:

I just tried to setup the event dispatcher method,
However after i set up a dispatcher in my “button panel” blueprint i cant seem to create the dispatch event in my “appliance blueprint”.

Is there something i missed?

Here is my Game Mode blueprint with a dispatcher set up called “CustomBeginPlay.” It’s meant to initialize other blueprints after the Game Mode has gone through all of its own initialization steps.

Then I drag out from the red square on the Bind function and create a new custom event using that (to ensure the same signature) and run the logic I want through it.

thanks for the help that worked

I was messing up with where the “bind” event should be, in the “listener” instead of the broadcaster.
It works like a charm now