Hi there, I am following a tutorial on how to get the ragdoll deaths, which is fine as I have set up the physics asset and so on. However there is a point in the tutorial that requires the actors capsule collider have its location set to one of the bones on death by using a set location node in the event tick event. As soon as I do this however the physics body seems to fly off as if the capsule collider is forcing it away.

I have tried several options and had a look around to see if I could find any solutions but to no avail. The options I have tried have been experimenting with different settings of what is having its location set, such as the actor itself and the capsule. I have also changed what bone they get set to, and I have triple checked to make sure that pawns and physics bodies don’t collide with each other.

also here is the video tutorial I am following; It is strange because in the tutorial it just works, and I have tried following exactly but still nothing.

Here is an example of the blueprints I am currently using. 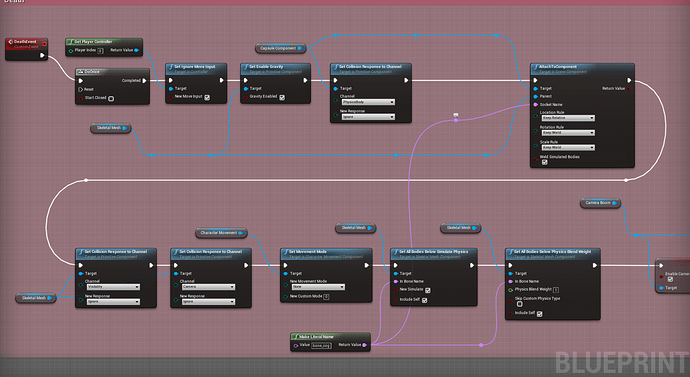 I appreciate the help, thanks.