I followed the Spawning the Course tutorial Endless Runner: Spawning the Course | 02 | v4.7 Tutorial Series | Unreal Engine - YouTube about 3 times to see if I got it right. When I compile I don’t see the floor or walls. It’s just and empty sky. I noticed someone else had this problem in a earlier version and all they had to do was set the “Collision Handling Override” to default on the “SpawenActor BP floor Tile” and it worked for them. It was already set to that and it still doesn’t work for me. Not sure if something else has to be done of if this is just a bug due to the fact I’m currently using version 4.10.

Could you paste your Blueprint setup? 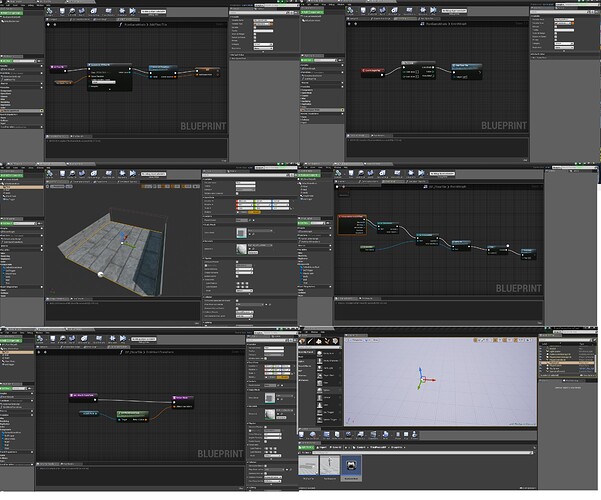 I should have mentioned. I’m a newbie. I’m not sure how to do those things.

Do you insert printstrings in multiple areas of the program blueprint or beginning. I still don’t understand about making gamemode active.

I would be great if someone could recreate this on their computer just to see if this works in 4.10 or show me if I missed something.

Looks fine. Double check that you have assigned your GameMode as an active one. Also I suggest you add PrintString nodes in those scripts to see what’s getting executed

Here’s how you set the GameMode, find yours on the list and select.

As for the PrintString, it depends, put it where you want to check what’s happening. In this case, it can be at the beginning of each function and make it print the function name so you can see if they get executed and when

Thanks a lot Phoboz. Setting it the gamemode is what the problem was. Because the name of it wasn’t gamemode I named it rungamemode and it wasn’t being used at all. I’ll be aware of this for now on. I wondered why none of the blue prints were being used during run time. What is gamemode anyway? Is a built in function so the user doesn’t have to reinvent the wheel? Thanks again.

Have a read here: GameMode