I’m setting up an UnrealEngine 4 C++ project, for the first time.

I followed the “Linux Quick Start” guide without issues, then continued with “How to Set up Qt Creator for UE4”.
Unfortunately I am stuck very near the end (in section “Creating a C++ Project”: “Now, click Run”).

When I try running my project from Qt Creator, it first shows me the warning message:

I select “Yes”, and then it shows me a second error message:

And after this error the run ends. What am I doing wrong?

I have the same problem.
Do you find an answer?

If you have plans to develop project using C++ I highly recommend to switch to windows. Using Linux is a nightmare - single line error in your code that makes Unreal editor to crash leads to restart that takes 5+ minutes. To figure out your error and fix you can easily spend a day in waiting for restarts.
Windows version restarts in a 10-15 seconds on same system.

Yeah, I’m developing my client-server game in Windows. And windows-server and windows-client of the game work fine. I switched to Linux to build server, because windows hosting is more expensive than linux hosting.
But I cannot open in Linux my project which I developed in Windows.

Try to find DesktopPlatformBase.cpp search for string with switches -NoEngineChanges -NoHotReload and change it into
Arguments += “-Progress”;
and then rebuild unreal.

Thank you. I will try this way tomorrow. I just use QTCreator to compile UE4 from source in Linux.

Much easier to compile from command line:

without all this redundant qtcreator configuration stuff

Recent versions (4.25+) of unreal does not finish project compilation with because of ^this^. So compile the engine as usual from terminal and then compile the project from qt creator or from terminal using make ProjectNameEditor, after removing these lines from within the project or from the tool chain. After this everything will work fine.

Hello again!
Last week I was busy, we tested our game with some players on a windows-server. All is fine!
Now it’s time to come back to linux-server as well.
Earlier when I opened my UE4-project in freshly compiled from source cod engine with some modifications which I was created in Windows the engine was crash in the same time.
Then I compiled an engine as serhii_antoniuk said. The compilation was over without errors.
Now I can open up my UE4-project. The opening process continues some minutes and when it reach 95%, the engine is crashed. I repeated this operation many times. Everytime a result is the same. See image below 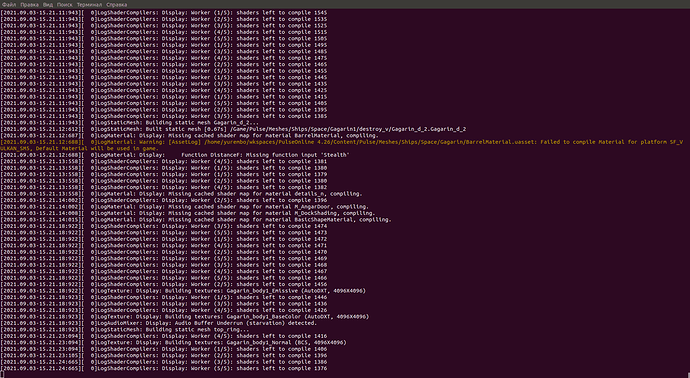 I did this, recompiled with make all - same thing. Crashes and opens a file browser with no files to the project’s path