I seem to have a bug in my editor whereby I cannot select via the drop-down list (public variable) which actor I want to target for my button to work.

Essentially it’s a pressure sensitive button that will open a door if the player or a specific object are on top of it. If either one moves off the button, the door will shut down/stay closed.

As far as I’m aware, the BP is set up correctly with no errors (referencing another Blueprint object I want to move via an object reference variable), but it just wont let me set the actor I want to utilise. I click the drop-down box within the editor viewport, click the door I want and nothing happens.

A bug with my project or Unreal Engine? Can someone help me out? 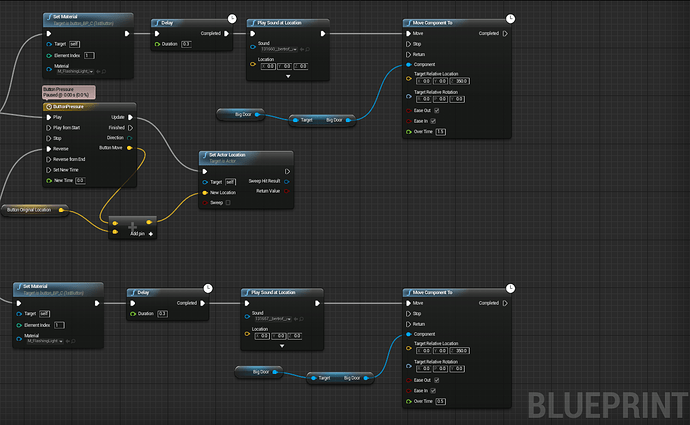 Feel as though this is a bug with the program, shouldn’t be doing this

Same issue here, I’ve created (and placed inside my scene) a simple actor blueprint with a custom variable of actor reference type and I’m unable to assign anything to it in my scene.

Edit: I found the issue, my actor was in a different streaming level than the rest of the scene and this was causing the issue.

I’m having the same issue with a day/night cycle asset I’ve made. I duplicated the engine skybox so I could keep my changes in the sky sphere colour whenever I update. Since it was technically a new asset, I needed to remake the variable. Now it just won’t select…

Sorry that this is old, but i had ran into the same issue and found this as the first hit on Google. To save any others some time, please follow @DeathUman’s comment which states to check your streaming levels and make sure they are the same.

That fixed it for me.

Hi Altair, have you solved the issue? I’m having the same issue here.