After many successful tests with the online subsystem using the editor, using the “Create Session” and “Find Session” nodes always fail when being used in a packaged development project.

Anyone able to point me in the right direction?

Can you see any errors in logs? They might hint you whats going on, also what service do you trying to use SteamWorks? Facebook?

I can’t believe I forgot all about the logs, thanks for the reminder!

It seems I’m doing something wrong with the packaging, because it does not recognize the onlinesubsystem.

I’m using Steam as the subsystem.

Looks like Steamworks is missing in ThirdParty for my packaged game, as well as any of the settings for Steam that were part of DefaultEngine.ini

Were they supposed to be automatically added or am I wrong?

hey justin. could you explain how exactly you managed to fix this? i got the same issue. thanks!

What do you mean by the redist?

I mean the redistribute files located in the third party folder for steamworks. 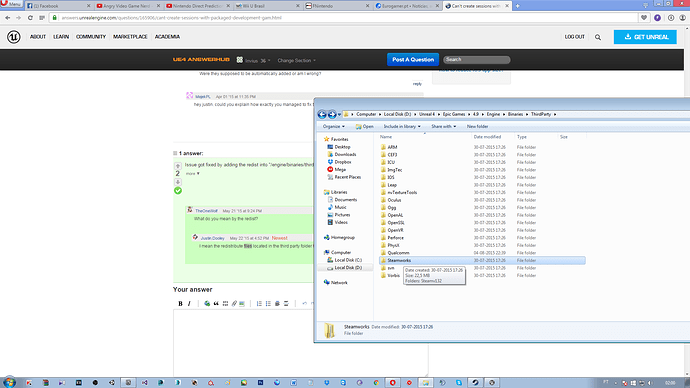 Im having this same problem and i have the steamworks folder, any ideia why this is happening?

With this now it works

I have the same issue, but have literally no idea what you are saying here. Could you expand please?