i am new to Unreal Engine and i am using UE5 and the advancedsessions plugin i get this error when trying to compile. i have tried copying the plugins from the main directory over to the project and still gives error(seen a post about this but on UE4) this didnt work for me, i have no idea how to fix this any help would be appreciated.

I don’t have visual studio open for reference, but you might look into your header files and add those module names if they’re missing it’ll throw that error up.

thanks for the help, but i am still unsure how to go about doing this. i have done this game in blueprints only and have zero coding experience. would i add these names to the build.cs?

Hi, you need to download the plugin from GitHub at
mordentral/AdvancedSessionsPlugin: Advanced Sessions Plugin for UE5 (github.com) 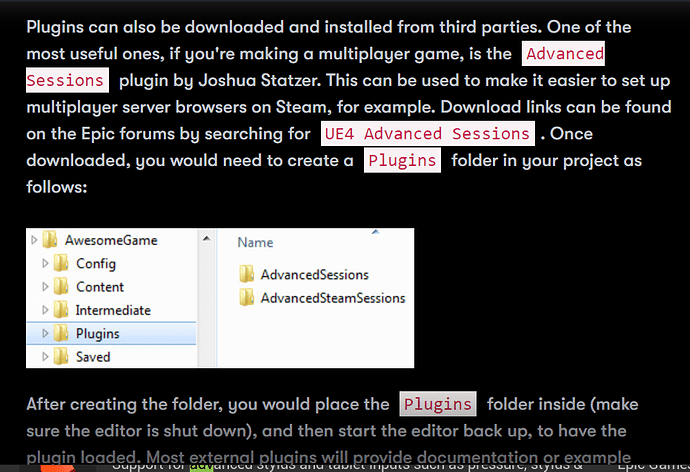 Basically, you go into your project add a plugins directory and copy into it the directories containing the plugins. When you open the project in Unreal Editor it asks if you want Visual Studio to rebuild plugins into the current engine. When successful you will see the plugins enabled.

so i did it this way and get the error “PackagingResults: Error: System.ArgumentException: An item with the same key has already been added. Key: AdvancedSessions”

i have managed a way to package it. by placing the plugins into the directory of the project. and deleting the Plugins from the engine Plugins Folder… However now when i try to run the game it doesnt launch at all…

I could probably pull up my project and have a look at how I did it if you haven’t figured it out in a couple days… It took me a solid work week or more figuring it out and I don’t like touching it much as a result lol. I still have socket connection issues on dedi server.

I believe I had to place the plugins inside the plugins directory under the engine’s directory in visual studio and not actually in the project directory. I can’t remember off the top of my head if I had to edit the build.cs files in that directory also, but I’m thinking I had too. Don’t take that too seriously because I’m not totally sure without tooling around with it. I had to rebuild the engine and then the project again. And then was I able to enable it in the editor with the tick mark.

I ran into some weird and hair pulling bug I believe a lot of people run into while building these plugins into the engine is that after you build it does some janky stuff saying “The following modules are missing or out of date” or something similar despite just building it again. I had to open the folder properties and temporarily set it to read-writeable just before building it or it always said that and even then it just reverts back to read only but that was something I HAD to do. It said that a lot after building the engine and project probably 50 times before it worked!

I don’t think visual studio or anything in unreal is cleaning up the old binaries when you delete and rebuild like this. You have to go in and delete the old ones before building or it comes out with some stuff saying it’s already there. Do as you may, but I say backup your project before attempting deleting anything!!

And I even screen shot anything I change so you can go back and fix it because building the engine as you know is way too big and takes way too long to just start over lol. You may not be able to open it again to even edit back the changes. Also the ini needs to reflect the changes in your online subsystem, the ipnet driver, and your steam ap id or your connections will return invalid.

Binary version is much more fun lol. Download and install and off you go! Building from source with plugins and connections is like rocket science.