I am fairly new to working with Unreal, and I have been following a video that is linked from the Unreal Launcher. I have the link, and when the guy who is speaking gets to jump, he says you need InputAction Jump. I have no clue if this was removed and there is a new button for it. This is the link:

Thanks in advance for anyone who contributes!

You need to define the action in the project settings/input/bindings page - at the start of the clip you can see this. Press the + button on the action mappings bit and type ‘Jump’ into the box, then choose a key/gamepad button to assign it to. Now in your blueprint it’ll show up.

I have that already. When I go to the Event Graph of my character, and right-click and type InputAction like the video does, I do not get the node.

As a side note, when the guy gets the node, he types jump. He then does input/action events/jump. All I get under input is AxisEvents.

Has this been found in other peoples Blueprints as well? Or is there another node. The node I need basically says if I press this button, do this, and when it is released, do this. I am new to this and am wondering if there is a new node now.

I’m still stuck if anyone was wondering. Has this come up before?

Hey, I just notice you have put your Jump in the Axis mapping you need to put it in the Action Mappings Like in the screenshot I attached.

Oh wow. Zaffryn, you are awesome. Thank you, I actually was able to get the node when I changed that. I fixed it and should be able to continue. Thank you so much!

Im in the same boat as Omega being new to UE4 and getting super stuck in a tutorial. 3rd Person, Vid#18) When I go to Project Settings to create my Punch Action (in Action Mapping), it doesn’t update, because I can’t access the InputAction Punch node in the Event Graph, like the guy in the video. I’ve spent the better part of several hours lookin for work-arounds, but haven’t one that I COULD make work.

Thank you!! I spent hours trying to figure that out.

I just ran into the same problem and I made the mistake that I looked for the node in the Animation BluePrint but he does that in the ThirdPerson Character BluePrint.

This thread is pretty old but maybe it helps someone still

Hello Jump needs to be in action not axis. 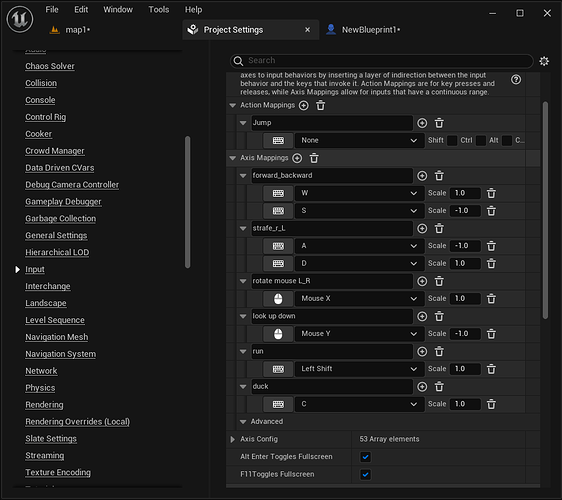