Can we have some TuT's that work

Hey there Evilhope, thanks for reaching out to us. Sorry, I’m having a little trouble understanding what’s wrong. Is there a specific article that you’d like for us to update?

Im so glad that you dont understand, a number of game engines claim to have the best documentation. epic is far from this case. There are no valid use cases from what im experiencing when you go to look up stuff. Im currently stuck on setting up movement because the old code has to be modified for the new patch on the engine. Now epic claim to be for the designer and not so much the coder as its all there.

Now ive tried asking for help on the because im receiving a null character found on the setting up movement part of the guide where you link in animation to your character. Most to all of the starting guides should be simple copy and paste exercises to get you familiar with how the coding style works. 9 hours in and 3 peoples help and im still no further forward with my null character error. Im still receiving in the animation blueprint itself this error. As far as the animation section went it was easy to follow or so i thought.

All i want is to be able to create a game with simple animations from the starter pack, link in simple contol’s for x,y,z etc then actually start to do some real hard coding of variables and conditions. What i expect is for any starting code to be respectively bug free so i can grasp the simple concepts of how the engine works 9 hours in for a simple copy/paste exercise set this to this that to that. but there no real explanations of how your doing stuff. People have to me to pass an Is valid argument to my character in that set code and ive done such but the problem is still there. Its still erroring out when i exit the game with a NULL character even though the character is passed for valid.

Now i am at the point where im just mashing anything and trying this and trying that just to get the dyam thing to compile properly. The animations you link in work, my game works with set animations jumping, prone, crouch,stand idle and all the rest but when i transfer the animation code to my sorce game im create i still get the same error passed which means its in the MyAnimation blueprint. my computer skills allow to to know at least this much. How to fix i dont have a clue because im still on the simple how to guides. Any way a number of suggestions to me to pass an is valid. with no use case and little to no information on how to actually use an is valid. Yes i got there yes it was hard work figuring out where this code when in the first place, yes my character passed is valid ,did it solve the issue im having NO it did not so kind of like this guide written a complete waste of my 8-9 hours.

Realistically any starting guide should take no more than a few days to simple copy paste, with no NULL errors. so ill ask this on a scale of 1 been easy and 10 been hard how hard is a NULL character or any NULL error for that matter are you able to fix with such a limited knowledge by this point. So i would class my self above the average normal user. Ive even done computers coding and websites for the past 20 years, servers , server hosting, kernels, windows, android, root kits, lunix, chipping of consoles, soldering , phone screens but yet i cannot follow a simple copy and paste exercise something is wrong here… it needs to be fixed or updated to be error free on the new engine, Its not hard and would take someone with much better experience than what i have right now with UE4.26 a few minutes to locate the issue… Currently my clock is at 9 hours and im now seriously considering a better well documented engine because clearly this aint it

Anyway ive now exhausted all options, all faith , and now all my ability to stay keen on this topic and am moving on here is the guide in question

In this How-To guide, you will create a playable character that exhibits different forms of Character Movement.

Now try this from step one and tell me if following the code guide. IF you dont get a NULL character error and if so how you go about solving a null error.

Hey there Evilhope, thanks for reaching out to us. Sorry, I’m having a little trouble understanding what’s wrong. Is there a specific article that you’d like for us to update?

Maybe the OP would appreciate having working projects to ‘take apart’ / ‘dissect’ instead of ‘broken static docs’. There are some people at Epic that seem open to the idea at least.

ugh what ever i done last night broke my animations totally im going to have to redo the whole guide again because i cant remember how to get them back working im honestly done after this ill try a new engine or wait for better guides. ill post with now broken animations with the null error still there. **** 627mb this could be an insane time to upload on my 250/kbs back in a few days

here is my original post with some of my code please note we are now upto 2 posts and 5 people with no clear real answer. i hope yo see how insane this is getting for a simple to follow TUT shurly i cannot be the only person experiencing this error when following the guide

My first note on the guide is character placement when you add spring arm and camera you 100% have to adjust the placement of the mesh by 45 deg so character is not walking sideways on to the camera so ive adjusted this but as far as the rest of the code ive left original.

Ive also started this project with no starter content to limit file size to 30mb so its easy for me to upload and you/whoever to download… and try out the animations Unfortunately the animations give a NULL error still but you can clearly see all animations work.

This sort of practice should be required when giving guides atleast a source to compare where you went wrong.
https://drive.google.com/file/d/1vPa…ew?usp=sharing

As stated im also moving on as i grasp the concept of 3d animations to a certain extent and the time wasted to bug check this is now gone beyond what i was willing to spend time on leading to insane frustration when people tell me to pass an is vaild? with no real reason why im doing it and or how to implement such functions. telling some1 just to pass an is valid function is like me telling you to use toilet roll when you go for a dump. To me its common but to you well lets just say “piles” is on the way coz you didnt follow the advice given and because you didnt understand that you could have problems later down the line. kinda why im tying to prevent error codes from working its way in to my source for a game usually this can lead to more unexpected issues

my character returning NULL About 941,000 results (0.43 seconds) on google so im not alone

A How To Guide for respawning player characters in Unreal Engine 4. 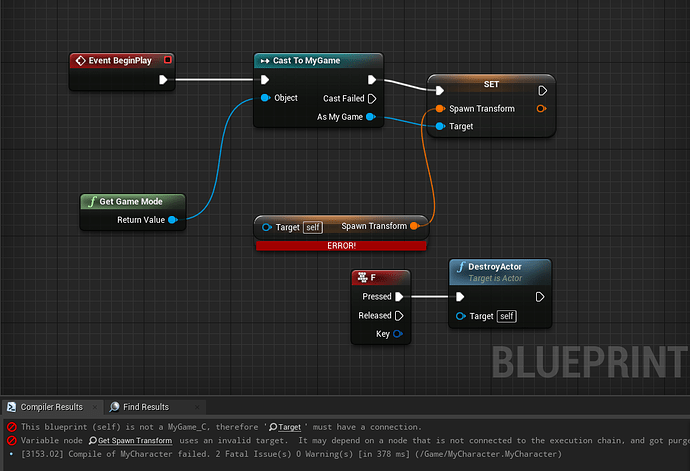 here is the fix which will get the re spawn function to actually work when pressing the “F” key. 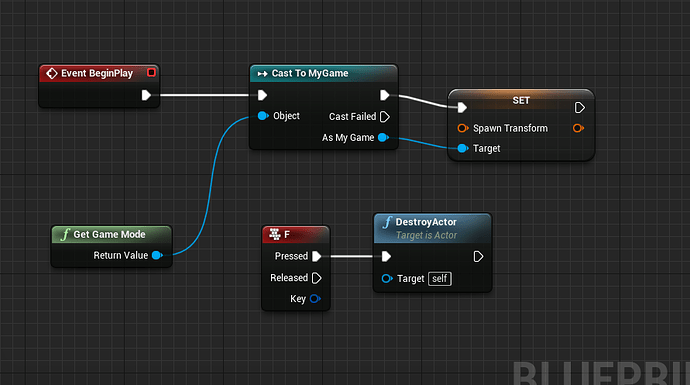 This seems to be a repetitive issue with major compile issues throughout the Tut’s and not really ideal for any beginner.

“How To guide, you will learn how to set up a simple respawn system”