Hello, I have been working on a split screen multiplayer racing game recently and have run into some problems to do with making character select screen that then decides the amount of players that are playing. The problem is that when I start the game there are always 2 extra empty characters that are taking up some of the split screen cameras. 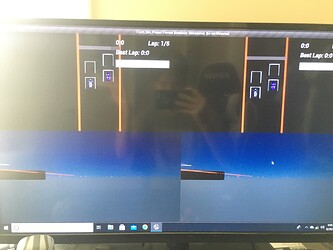 image1920×1440 127 KB
How the system works is when you go to the quick race option you press a on one of the 4 controllers and then that tells the game that players specific controller ID and then gives them control over the player 1 slot and then they can change skin of there racer, then when everyone’s ready you hit race and it uses the remove player Node on each racer that did not lock in meaning there should only be the players that locked in but as you can see from the picture that’s not what’s happening. I have used the node get number of players and found that the game is displaying that there are 4 players when there should be only 2 so I think it’s just not removing the player controllers through the remove player even though I believe that’s what the node does. Any help with this would be appreciated!