Can only have one timeline?

I’ve been beating my head against the wall trying to figure out why my timeline wont run.

It appears I can only have one per blueprint or something? There’s no warning or anything, every other timeline I place simply does not run when told to. The other ones aren’t currently running.

I can’t have all my functions in a single timeline, how do you get around this?

You can run more than one Timeline in the same BP. Can you post a screenshot of your BP please?

You can run more than one Timeline in the same BP. Can you post a screenshot of your BP please?

That doesn’t appear to be the case. Two identical timelines, when I switch which one it is trying to call the other wont work.

I have tried making other timelines. Only the SheathingTimeline ever plays.

Edit: Just noticed one of my other timelines play. It feels like the new timelines being made are corrupted or something. 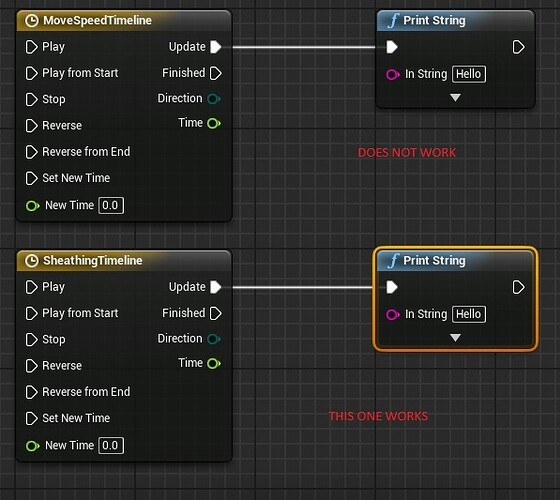 All new timelines when using ‘get’ on the timeline returns None. Is this a bug in UE4.6?

It thinks the timeline doesn’t exist.

Hello,
I just did a try in a 4.6.1 fps template project two timelines sliding a mesh in same blueprint and it works. Try with a blank new project and if you have the same issue it may be your update of the version of the engine, if not, maybe your project been bugged by upgrade.

It doesn’t appear to be an issue with having two timelines running.

It’s an issue with for some reason the new timelines being created do not exist when called. Eg. I make a timeline, I get timeline then query f.ex ‘is playing’ and it errors saying that the timeline is ‘None’.

This is what it says when I query if RunTimeline is playing.

Found the problem. Using a get on a timeline in a function doesn’t work for queries.

If I query a timeline for ‘is playing’ without even executing anything related to it, it allows me to affect the timeline from within a function. If not, I can’t.

For the sake of resolution, I posted the bug report and it’s a known issue. Work around is to have a get timeline -> is playing that is connected to nothing or use an event to make it play/stop.