You may want to try making the death volume a blueprint of its own instead of having it underneath all of these other components in this blueprint. It could be the hierarchy that is causing the problem. You would also either want to set the collision type to BlockAllDynamic or change your event to OnComponentBeginOverlap instead of OnComponentHit.

Alright, I’ll try those. I’m not sure how to add the separate blueprint to the other one, because it’s randomly generated. Wouldn’t I have to do that in the viewport of the original one?

Well after some experimenting I finally got it to work! Thank you for your help!

Hey, so one last thing - How can I make a record system that keeps track of your high score of coins collected? Just following the randomly generated tutorial you earlier recommended.

You can find out how to do that through this tutorial. This particular set up is talking about storing lap times and best lap records but could be appropriated to a score system as well. You could also use it to track a “Longest time” which could be nice for an endless runner.

Thanks. I watched the entire video you sent, however I found it hard to follow, because I obviously didn’t watch the previous 8. Would you have any ways in a more simple format to have a record/high score system for pickups? Following the previous tutorial? I’ve got what you recommended for the pickup.

This set up is about as simple as it can get. All it requires is to create a variable, add to that variable whenever picking up a pickup, if the total reaches an amount over the high score, then overwrite it whenever you add more score. You can then save it as he does in the 10th video and also output it via UMG as he does with the lap times.

Thank you, I’ve actually tried this, and I didn’t seem to succeed in doing that in a different format… Sorry if this get’s too complicated for you, but would you mind maybe just taking a few screen shots of a blueprint that you can make with the 2d sidescroller? If not, that’s fine, I’ll just have to find something else.

Here’s what I’ve got. I also varied it a bit, so that’s might be why… (It’s a long story about why I named certain things what they are, so you might not want to ask

) How would you suggest to make this work? 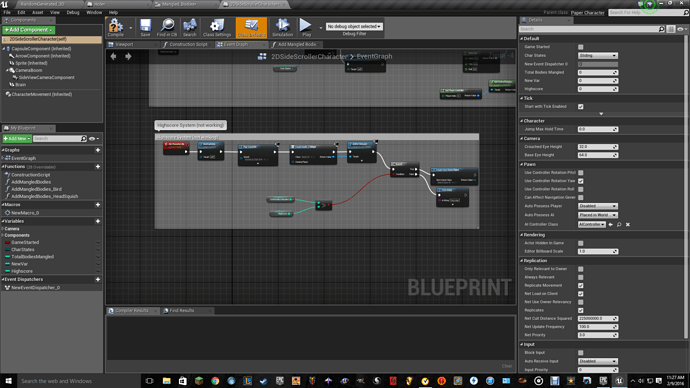 I can’t really see much in the second screenshot, but it doesn’t seem like TotalBodiesMangled is being set anywhere. It needs to be incremented every time an enemy is defeated (at least that is what the name suggests.)

As for your Create Save Game Object node, I can see that nothing is actually being done there. Please be sure to watch the 10th video in that Time Attack series as it explains how to use Save Game Objects in Blueprints.

Where would you suggest to set the “total bodies mangled” node?

Whenever your score should be increasing. If it is when an enemy is defeated, you should be able to set it in the same line of logic where the enemy is killed or destroyed.

As I’m watching, I see that he has a lot of things in the previous videos (save game check), are those necessary?

It doesn’t seem to want to show up under the blueprint where it’s destroyed… It’s all right, I have to go now, so I’ll be back around 5:00… Thanks for the help so far!

It is just a custom function that you can create. It was empty at the beginning of the video so it shouldn’t be an issue as long as you follow along. If you do find anything missing however, watching the entire tutorial wouldn’t be a bad use of your time as it teaches a lot of various things that would be useful for any game designer to know.

I appreciate the recommendation, but I’m running out of time for this to be done, I have a VERY strict deadline. Would it just be possible for you to compile something simple with the information with what I’ve provided?

All I need is for it to keep track of the most “mangled bodies” in one run, and display that on screen, and on death screen/widget.

While we do strive to provide as much assistance as we can, we do not have the resources to create assets or projects for individual users. When it comes to cases like this, it is best to take the time to watch the tutorials as it will help you learn how to put these mechanics together for this instance for future projects.

Alright, well thanks for the help anyway.