Can any of you make new UnrealScript projects with nFringe?

Am I the only one this is happening to? Any time I create a new project using nFringe in Visual Studio, the project is broken. It won’t let me set the compiler location or anything. 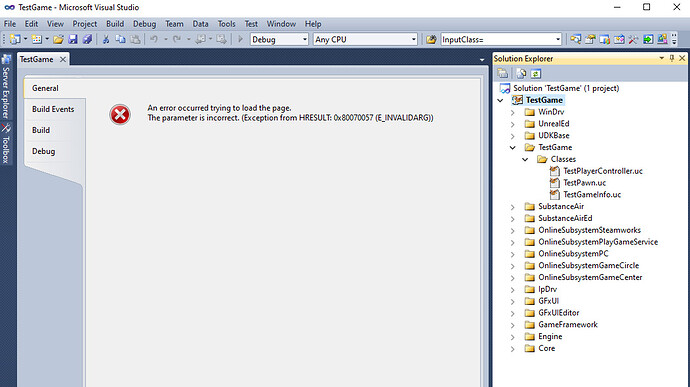 I asked PixelMine about it, and they’re looking into it.

Would it work if I could get my hands on a blank but working uproj file and then edit it?

I’ve never used nFringe. I just use the Unrealscript plugin for Sublime Text 3.

Is nFringe worth looking into? What features does it offer that you typically use on a day-to-day basis?

It was what I started with and I ended up liking it, so when I started working on Himeko Sutori professionally, I paid for the professional version and kept using it. That was the quickest way for me to make the transition uninterrupted. I’m not sure I can recommend it now though.

It was nice to be able to create UnrealScript projects from inside Visual Studio. And then it had a lot of options that you could set (they would be in the properties window in the image above, if it were working) for how you could play and test the game when you click debug. (I think under the hood it was just adding command line arguments.) And in addition to that, it had all the usual IDE stuff that you would expect–code completion and stuff like that.

Maybe I should look into Sublime if I’m going to make a pure UnrealScript project.

My Nfringe suddenly stopped to work, I send them an email willing to pay for the commercial version, but no one answered me. Solution, I moved to SublimeText 3 with Unreal Script plugin and it is working like a breeze. What I most need is the autocomplete function and the ability to navigate between classes, and SublimeText does it, and it is free. So I said BYE BYE NFRINGE