Can a sprite be given thickness?

Is there a convenient way to have a 2D pixel art image with transparency (not partial) rendered with a thickness in Unreal Engine? Paper2D does exactly what I want, except it’s a flat plane.

I’m able to achieve the effect by making an SVG outline and using Blender to make a model and map UVs, then import that into Unreal, but it seems like a lot of steps for a somewhat simple model. I am fairly new to both of these tools and models in general, so I wouldn’t be surprised to be missing something obvious.

I asked this earlier on [StackExchange][1] as well. 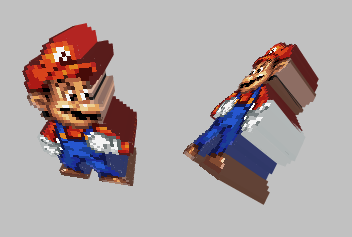 It seems kind of vague to me, so I’d assume you’re talking about being able to travel away from and towards the screen while the world is 2d? I’d say that’s just a 3d world with controls bound to 2d pathing only, and you could set limits on how far back and forward you could go by setting invisible walls or only allowing forward/back controls at certain locations through the use of trigger boxes.

If you’re talking about the illusion of 3d, that’d just be the use of shaders and/or good normal (or whichever type you prefer) mapping. I suppose it could also really be a 3d model within the 2d world.

Only my amateur opinion.

And yeah, the modelling process can be long, but gets quicker as you become more accustomed to it, however.

Sorry if I wasn’t clear. I’ve updated the question with an image. I want to have a 3D model from a sprite, or at least the appearance of one, so that when viewed from the side it’s got a thickness to it, however the front and back will still be flat. Something akin to how Perler Beads look, if that makes sense.

Has this been figured out? This would really help me

I never found a simple solution. I tried with Unity as well to no better results. If I go back to this concept I’ll probably have to write a couple scripts to either generate the mesh at runtime or automate the Blender process I mentioned.