I am learning engine six months. According to my observation it has advanced not bad. I decided to create a chamber within the character, which does not change its position in space, and should not be a player, but just watching him. I appeal to the more experienced developers and those who know the solution to this problem, please tell me where to start? Use the character or pawn? Create a separate camera or not? Or tell us your thoughts. Thanks in advance.

I’m not sure if I understand the question, but you can just create a character, and add a camera and a camera boom into the character components.

Take a look at the static camera section in the documentation here, https://docs.unrealengine.com/latest/INT/Gameplay/HowTo/UsingCameras/Blueprints/index.html#usingastaticcamera

That should give you a start on a static camera that views the player from a fixed location. With regards to the ‘monitoring’ of the player, if you mean that the camera should track the player while remaining in a fixed position i.e like CCTV, then you’d probably want to setup a system whereby the camera uses something like a ‘find look at rotation’ node to update it’s rotation to match the player.

Take a look at the static camera section in the documentation here, https://docs.unrealengine.com/latest/INT/Gameplay/HowTo/UsingCameras/Blueprints/index.html#usingastaticcamera

This document is little bit oldie for actual version of UE. I don’t have a Camera in the Basic tab. Instead of it I have it in All Classes tab. I think developers moved Camera to somewhere another place. And then: where is the “Lock Viewport to Actor” item in UE4.8 now?

everything turned out. but!
Examples engine start is carried out with the character. which is located on the map. how to do the same?

everything turned out. but!
Examples engine start is carried out with the character. which is located on the map. how to do the same?

I got kind of logic in Level bluprint. 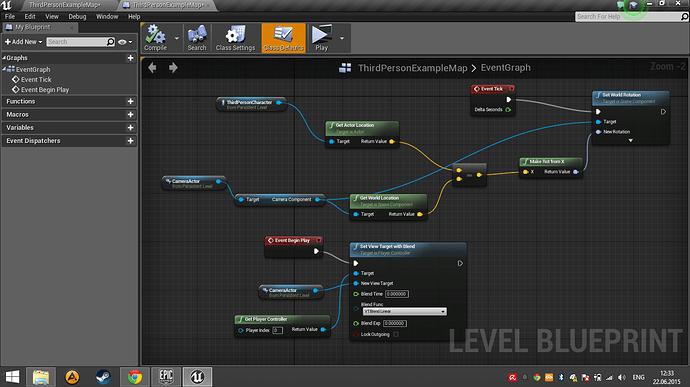