I’m working on a levitate ability and having trouble with the camera lock. It works great in PIE but goes completely whack when in a packaged build, if anyone knows what causes those kinds of errors and could help out it would be greatly appreciated!

Apparently it’s an over 18 vid…

Is this on tick, by any chance? You basically can’t use a delay on tick, if you think about it

Sorry about the age restriction, that’s fixed now. Also it’s not running on a tick, just a loop delay that’s a lot slower than a tick

Now the vids are private

Can you show a bit more of the BP, it’s hard to say anything meaningful.

Alright so, I fixed the videos properly this time, I promise haha. (double checked as a signed out user)

Basically the way it works is through a physics handle that grabs a targeted object and can be moved left/right/up/down by adding relative location. 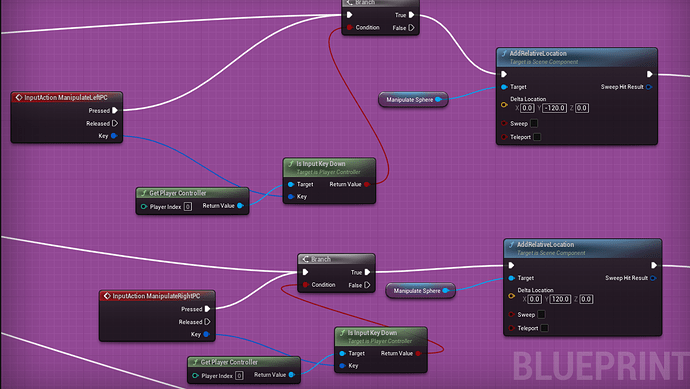 The camera code looks ok, but some thing might help ( in no particular order ):

It looks a lot like the object is jumping around actually, and hence causing the camera shake.

I never use physics handles, it’s normal tell them to move 120 units at once?

Thinking about it actually, wouldn’t it be easier to just make the cube follow the camera?

So I removed the delay and it causes the object to move by itself very fast.

As for having the cube follow the camera, what would be a good way to try that? Using the cube as the start point for the look at rotation or something else?

Ok, so I’ve coded something that will ‘stick’ the mesh on the end of the camera: