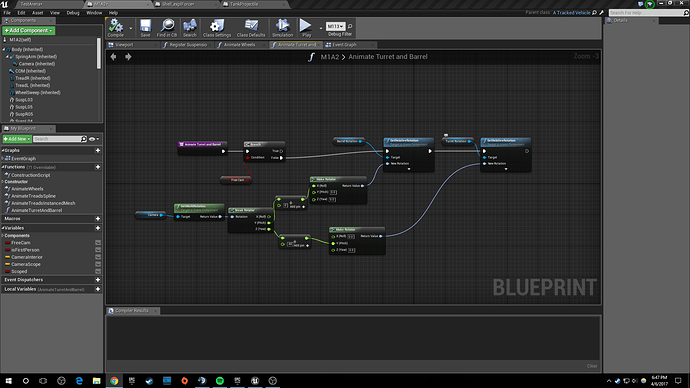 First issue I see is that you take world space rotation of camera and then use it as relative rotation for turret, don’t do that - rotations and positions need to be transformed into a proper space before they can be used together. Or do your calculations only in world space or only in local/relative space.
I don’t have editor in front of me, check if there is GetLocalRotation or GetRelativeRotation for the camera and use that instead of GetWorldRotation.
This approach will work only if both turret and camera are attached to the same parent and don’t have any offset in between.

More generic solution take more steps but can be wrapped into a single function, this function can be used to rotate any amount of turrets on tank into any arbitrary direction.

By replacing camera X vector with some direction in space, like for example there is target somewhere in the world and you select it, you can calculate direction to target as TargetPosition - TankPosition, feed this vector into the function and you get rotation of turret towards this target.

Thanks! It works perfectly now