Hi there. I’m trying to export a rigged character from Cinema 4d to Unreal. The rig works perfectly in C4D, but when I import the FBX into Unreal, some weights seem to be broken when I attempt to move the rig. Any idea what could cause this, or a workaround? 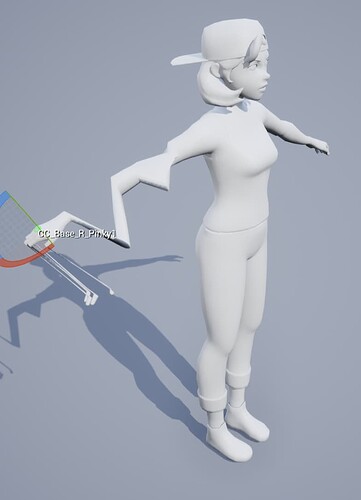 those appears to be wrong rotations on the bones. usually when they are not aligned correctly in the rig. hard to explain or figure out from the image.

so if you have bone1 set up incorrectly then childofbone1 will be messed up.

it looks the other hand is ok, see in c4d what is different between the two bones.

also maybe the weightmap is not correct.

Thanks for you reply. I was able to get to the bottom of this. The issue was that the rig was not a single bone heirarchy. Some bones were parented underneath nulls instead of other bones. Once this was fixed, everything worked perfectly. Solution Found!