I can’t get this to work for the life of me… I have a function in an actor class I created, I want to directly call it from a button. I exposed it with UFUNCTION() and tried calling it from OnClick event, but it’s not being called.

Can someone show how to do this? Thank you very much!

Did you specify that it’s callable from the blueprint?

I tried that, unfortuantely doesn’t work. Here’s what I have in the SomeActor.h

This is what I want to be called.

I created a Blueprint out of my C++ Class. Here’s what I have in the widget blueprint: 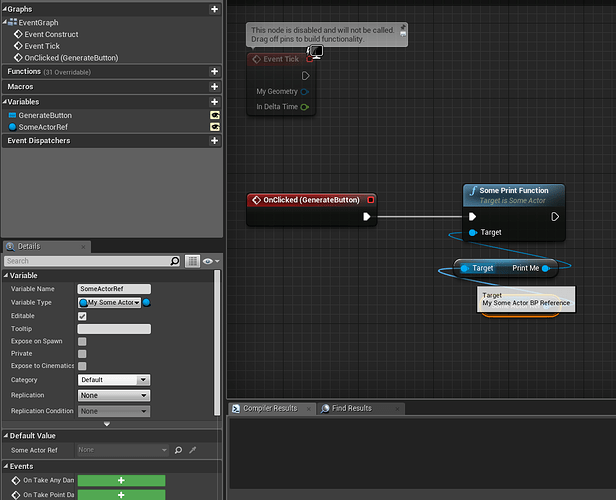 Inside my Blueprint of SomeActor I made a reference (to the blueprint actor) to be passed along to the Widget Blueprint:

However, OnClicked doesn’t call the SomePrintFunction. Perhaps someone can chime in the proper way to do this? I’m stuck and this is an important feature

My guess it’s not getting the reference. What should I do? Thanks!

Also, you need to set the reference to something in the Widget. It does not have a reference set and you’re essentially calling from a NULL reference.

Is this a world actor or in the player character class?